“I see naked people” was adopted last year by my life drawing group (SLG, or Saturday Life Group) as its motto on the occasion of its 20th anniversary.  I didn’t get it at first.  It’s supposed to evoke the little boy’s shocking statement in the movie ” The Sixth Sense “:  “I see dead people”.   We had t-shirts made up with the slogan on the front and an outline of a nude figure on the back.  I wore mine fearlessly to Home Depot and the like, oblivious to the curious stares until someone would ask me about it.

Recently, as a result of several visits to an exhibit at the Boston Museum of Fine Arts, I came to realize that what we see in SLG isn’t naked people at all–we see nudes.  The MFA exhibit was the Nudes of Edgar Degas.  The best of his nudes are pastels of  nude women engaged in some kind of bathing activity with their backs turned to the viewer/artist.   One of the many innovations credited to Degas was this rendering of a person unclothed on purpose, that is, for a purpose of her own, rather than a person unclothed and posing for the benefit of an artist who wishes to draw or paint a nude figure.  The naked women by Degas were disturbing, therefore, stripped as they are of an artistic rationale.  Nakedness is shocking, nudity is art.  (If you think this is odd and hard to grasp in this day and age, consider the outrage that greeted Manet’s “Olympia”–she was depicted as a prostitute awaiting her customer, in a pose that had not shocked anybody when it was assumed by Venus, the goddess of love.  See the Wikipedia article here.)

Anyway, this week I am treating you to some nudes.  And what connects my nudes (albeit tenuously) to the foregoing two paragraphs is the word “people” in the SLG slogan.  Usually I don’t see naked or nude “people” because usually I only see one person/model at a time.   Models charge for modeling (clothed or not, but they get a little more for taking off the clothes), so it is  a luxury to have more than one model posing at  a time.  Especially since you can look at only one at a time, really.  I have trouble understanding why simultaneous multiple models would even be desirable– getting one figure right is challenge enough.  Be that as it may, I guess we had some extra money accumulated in the kitty, so one morning  a few weeks ago I went into SLG to find not one, not two, but THREE models undressing for our benefit!  Fortunately, I could not see all three of them well enough to incorporate all three into a single drawing.  Two was hard enough, thank you.

We had two hours (less break time) to work this double pose.  Our third model took his pose on the other side, forming a kind of triangle.  Yes, he was a male.  Radical!

This past Saturday, we were back to the normal single model, suddenly seemingly so easy! 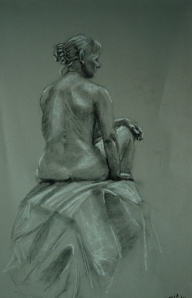 I remember complaining in the past about getting more than my fair share of back views, and although I still do seem to get a lot of backs, I’m not complaining anymore.  I have been humbled.  Backs are hard enough to do.  The challenge is to keep it simple even while suggesting the complexity of the bone and muscle structure beneath the skin.  I am still working all that out and thus may be faulted for overdoing the complexity thing.

While rooting around in my stacks of older drawings looking for something suitable to submit for an exhibit, I came across this one:

Funny how a drawing I don’t even remember making could magically appear and rise to the top of my favorites.   I am fascinated to see how I used a light brown chalk to highlight his hair and applied those white strokes of light just as if I were as expert as, say, John Singer Sargent.  Yet I recall nothing of the process.  Probably it went fast, and was followed by something else that loomed larger in my mind.  I usually make a note of the length of pose and the date on my drawings, so I am able to confirm that it was a 40-minute pose, and it turns out I had to accompany my granddaughter to a court hearing right after the drawing session.  Yes, a court hearing could obliterate whatever came before it.

After patting myself on the back for the discovery of “His Dreaming”, I tore up many, many others that embarrass me now.  God forbid I should be subjected to the fate of Degas with  my inferior projects unearthed after my death and exhibited in a museum (I should be so lucky, but this is “My Dreaming”) alongside the good stuff, where pompously overinflated amateurs (like myself) can sniff and proclaim them to be worse than unremarkable.

That I am getting better is proved by the callousness with which I tossed my inferior stuff, and I think my progress can be attributed to the work I have been doing with Peter Granucci.  What we do in his figure workshop is all practice, practice, practice, so there’s not much to show off–yet.  He has promised that exhibit-worthy projects lie in our future.  (As if a venue could be found for an exhibit of nudes.  Naked people.  Oh, the horror.)

5 responses to ““I See Naked People””