Last Thursday I attended the opening reception for an exhibit of the landscapes of Eric Aho at the Currier Museum.  Really interesting abstracted landscapes.  Eric and the curators presented a slide show during the reception that was SRO.  I was lucky enough to get a choice seat next to Mary McGowan.  Mary founded the McGowan Gallery in Concord, and proudly reported (sounds better than “bragged”, doesn’t it?) that she had exhibited some of Eric’s paintings back in the day.  (Mary has recently retired from the Gallery, passing on the job of discovering new talent in the New England region to Sarah Chafee.)    We, Mary and I, being of similar age, conferred over the idea of taking up painting at an advanced age.  A sensitive subject for me.

Mary said she had always liked to paint, but would not take it up in retirement.  Her eye was too good.   “My eye is better than my hand.”  She meant she would be so hypercritical of her own work that she would not be able to enjoy the results.

That got me thinking.  Do mediocre painters paint mediocre pictures because they don’t see what’s mediocre about them?  Is the reason I am not churning out masterpiece after masterpiece that my eye is deficient?  No, I think I know what’s good and what’s bad.

So is the problem technical–a lack of skill–the hand, as Mary would put it?  Skill is not something that comes and goes.  It grows, or it declines, and yes, you can have a bad day, but once you learn how to apply  paint to a surface, to achieve a certain effect, you have the “hand”.

The critical element is something I used to call “inspiration”, but earlier that day I had watched a lecture online, broadcast from the Cornell University alumni reunion that was I skipping, on the subject of imagination–the importance of imagination to the advancement of the human race.  Who first realized the value of fire?  Who first thought of using a wheel to move heavy objects?  The realization of fire, the concept of a wheel, each required the thinker to form an image in his mind of the usefulness of such a thing–to imagine something not yet in existence.

(This reproduction of his webpage constitutes “fair use” under the copyright law.  I hope.)  Art in the 20th and 21st centuries has become all about the idea underlying the work.  Skill is assumed, or even discounted.  Think  Jackson Pollock.  He was not particularly skilled at the painterly underpinnings such as drawing.  But he was fiercely determined to be an artist, and he had imagination.

All this deep thought made me realize that what I have been doing, mostly, in my making of paintings is developing skills.  Every once in a while, an idea trinkles into my head and produces something special, like last week’s “In an Artist’s Studio.”  Repeated here for your convenience and also because I just love to show it off:

Acquiring skills is important.  If, last week in the artist’s studio, I had been struggling harder to get the proportions correct and the skin tones plausible, my mind would not have had the luxury of considering the composition, which made all the difference between an exercise and a showable painting.

My regression from that pinnacle continued downhill this week.  I won’t even show you the entire painting.  It will be consigned to the “dust bin,” an antiquated term which seems  more fitting somehow than the trash can.  It contained a few OK parts, which I have cut out for you here. 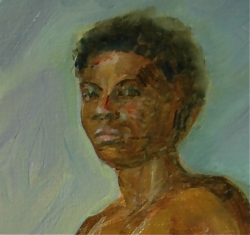 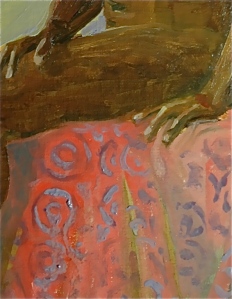 That was Tuesday.  Sunday I decided to paint a portrait in my three hours with the model–another “exercise”, I guess.

It looks better in person.

Remember my “Iris Interpreted”?  Little brown fairy (Grace again) ensconced in a giant iris.  From  June 16 to  July 21, it will be exhibited as part of the Women’s Caucus for Art “Flowers Interpreted” annual show.  The site of the exhibit is the Epsom Public Library.  There will be an artists’ reception on Friday, June 22, 5 pm to 7 pm.  Come if you can.

A continuing exhibit without reception features seven of my landscapes in the Bedford public library, on the bottom floor, through the month of June. After June 30, one of my paintings, a rather long and tall one called “Enchanted,” will remain hanging there for the summer because it won that privilege by a vote at the annual meeting of the Manchester Artists Association.  Look for the tiny frog near the bottom.  It’s hanging near the children’s book section, so I’m hoping the children pause long enough to delight in the frog.

at the Hatfield Gallery in Manchester; at the Bartlett Inn in Bartlett; at the Library Arts Center in Newport; Bedford Public Library, in Bedford; Epsom Public Library in Epsom; and at her studio by appointment.