Haven’t  you heard enough about Sandy already?  New Hampshire is one of the suffering states, but I got off pretty easy.  Looks like I’m going to have to pay for a new roof without help from the insurance company.  Being unscathed myself, I insisted on  holding the Tuesday life group.  It was, after all, a pretty nice day, weather-wise, a little rainy but hardly any wind to speak of.  But most of the other artists were dealing with one storm-related problem or another and couldn’t get here for the group.  So it was just the model, another unscathed artist, and me.

We set up in the window side of the studio and had our model lounge on the familiar old brown leather sofa.  We found ourselves looking down on him, which felt strange at first.  The model stand that we usually use puts the model at my eye level or above.  (I sit to paint.)  We also forewent any supplemental lighting inasmuch as the sun was streaming right in at our backs (yes, SUN).  No dramatic shadows to fall back on for creating interest.  But as it turned out, I didn’t need any drama from lighting.  I accepted a full-on frontal foreshortened pose with the model’s feet practically in my face.  (Of course that’s an exaggeration–I did say “practically”.)  I was super pleased with this development because it furnishes a response to a taunt from  one of my colleagues who, upon viewing last week’s blog, complained that I was not giving enough attention to feet.  Since he is also one of our models, I suspect it is HIS feet he want more attention paid to.  Nevertheless, feet are feet: 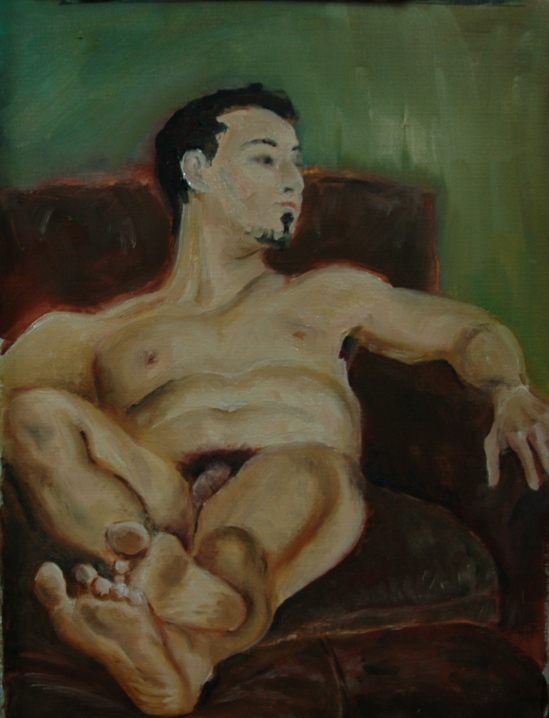 The Feet Have It

I have to point out that it is not often that you get to depict the wrinkles on the sole of a foot.  Having recently watched a documentary on Lucien Freud, I also felt as if I were channeling him every so slightly, as I tried to paint the effect of hairy legs.

On Friday, four of us  met with Peter Clive for a quasi-workshop session.  Peter had during the summer been attending our Tuesday group whenever he could, but currently his teaching schedule at the NH Institute of Art kept him there on Tuesdays.  So he offered to come instead on Fridays and critique work in progress, when corrections are possible.  In the course of the summer and now the fall, Peter has seen quite a few of my paintings.  He compliments me by saying something like “That’s a nice study,”  or even “That’s a great study.”  He said that about The Feet.  Noting his use of the word “study”, I had reconciled myself to the reality that a serious artist does not go around producing a finished painting in three hours (actually less when you consider setting up time and break times).  The fact that I consider these paintings as complete if not completely wonderful just shows how far I am from being a serious artist.  There is a whole level of professionalism up there that I can only imagine.

However, the work that I did Friday was, at the end of the three hours, pronouced a “painting” by Peter, “not just a good study”.  Yes, he actually said those words. 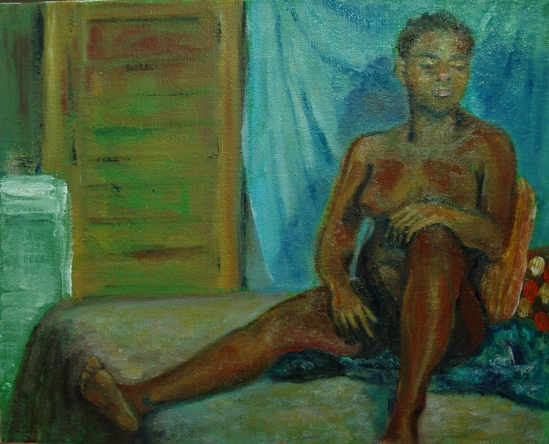 He liked the composition, which I admit, I  had worked out early in the process. before paying much attention to the figure.  So that was unusual.  Perhaps because of that, a certain painterly quality emerged for the whole painting.  But when I got home, I noticed that the right leg was too short, both as measured against her left leg and as measured against her torso.  So I “fixed” it.  I tried to duplicate  the original foot before I covered it up, but the new foot  (FEET again!) doesn’t look right.   I may have botched this painting by correcting one errant part of it that may not have mattered in the big scheme of things.    All is not lost, however–the same model is returning in two weeks for the same pose, and I will get another crack at that foot.  I am also hoping to paint a larger version from the same pose.

A plug for the Soo Rye Art Gallery opening on November 10, reception from 5 to 8 p.m.  The address is 11 Sagamore Road, Rye, NH.  All the artworks being exhibited are priced no higher than $300.  I contributed “Totem”, “Lotus Studies”, and “High and Dry”, three of my all-time favorite paintings.  If you can’t get to the opening, the show  continues through the end of December, but I expect that a lot of the art will be sold at the opening.

Here is some history for these three paintings:

Totem was accepted in a regional show juried by Don Stone for the Rockport Art Association (Massachusetts, not Maine).  I painted Totem on the coast of Rhode Island, near Narragransett, with my artist friend, Mary Crawford Reining.  The totem, actually more accurately called a cairn, in the painting really did exist exactly as I painted it.  Other cairns had been built by person or persons unknown, but this one was the most adventurous.  It was more than a cairn–so I titled it Totem.  Earlier in that morning, I had painted another, more complex view of this rocky beach, and had an hour left over.  Only much later did I  realize until later what a successful painting Totem was.

Lotus Studies won Best in Show at a Manchester Artists Association exhibit, about a year ago when the MAA had a gallery of its own, but I created it at least a year before that for the Women’s Caucus for Art annual 6×6 show.    That had been my first year in the WCA, hence my first 6×6 show.  I had easy inspiration from photographs taken at the lotus pond in Wickford, Rhode Island, again visiting Mary.  The next year we tried plein air painting at the pond, but my output was worthless.

High and Dry has no  distinction to report, but it deserves an award, in my humble opinion, for oozing the most charm.  I have Mary Crawford Reining to thank again, for High and Dry:  this time I was a visiting her Marco Island home for perhaps the third year in a row.  None of my Florida paintings had amounted to much until this one, and I still consider it the Prize of my Florida collection.  Funny thing is, Mary had had her eye on this boat for a long time, wanting to paint it but never having got around to it.  So I swoop in and steal her subject as it were, and make it one of my best from Florida.

Only in the writing of these descriptions did I notice the huge debt I owe Mary Crawford Reining for guiding me to these three inspiring subjects.

at the Hatfield Gallery in Manchester (Langer Place, 55 S. Commercial St., Manchester, NH); at the Bartlett Inn in Bartlett; at the Red Jacket Inn in North Conway;  at the Soo Rye Art Gallery in Rye NH; at the law offices at 41 Brook St in Manchester; and at her studio by appointment.   Also, if you want to plan ahead, on December 1-2, a two-day show  of unframed works at Adrienne’s studio on the 4th floor of  Langer Place, 55 S. Commercial St., Manchester, NH; the artwork will be priced no higher than $150!  At least six artists are participating in this sale.

6 responses to “The Week of “Super Storm””