Each painting has a story, but 14 stories is a bit much to ask my followers to, um, follow, so I am just adding a few comments underneath, same as I did for Mary’s paintings in my prior post.  Super-short stories, in effect.  Unlike the spread of Mary’s paintings, I organized mine in chronological order to the best of my memory.

We were huddled behind some shrubbery seeking shelter from stiff winds on a relatively chilly day (for the tropics), so the subject was not selected by inspiration but forced by necessity.   Usually my first painting turns out to be the best, or at least one of the best, in a series of outdoor paintings.  As I was working on this one, I thought it was going to be an exception to that “rule”, but now I am liking it better. . .probably because I am far enough away from the scene to be able to forget reality.

Island Woman.  It becomes a scene of intense frolicness (frolicity?) on the weekends, but we wouldn’t have been able to park anywhere close then, much less find a place to set up easels. 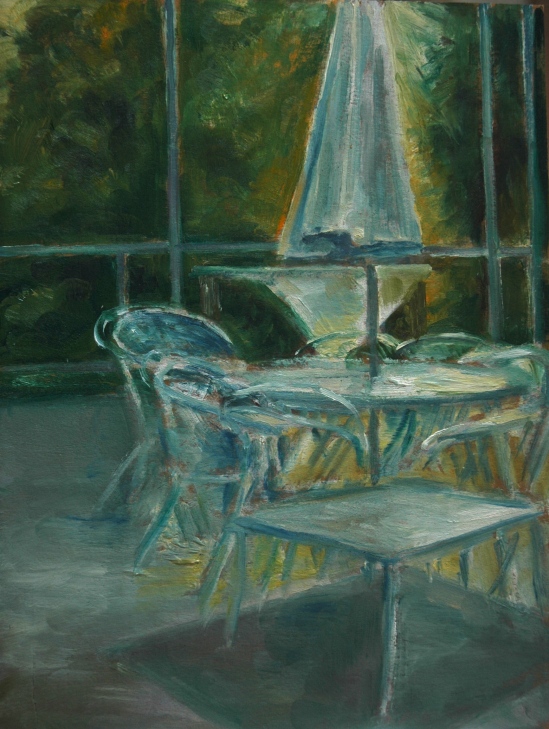 Lanai Sunset.  Strictly speaking, not plein air, but inspired by sight, memory and assisted by iPad photo.  Perhaps still a work in progress.

Waterfront Home.  The boats are up in the air on hoists, and I worried about how it would read.  But not important now, I think.  The water looks liquid, don’t you agree?

Frangepani Tree.  Economy of effort:–beautiful bark, few leaves, and blossoms rationed to bloom at the ends of branches for short time.  This one had buds but no blooms yet.

Farmers Market Musician.  We were chased out of the grounds proper and forced to set up behind the “band”.  Lucky for us! 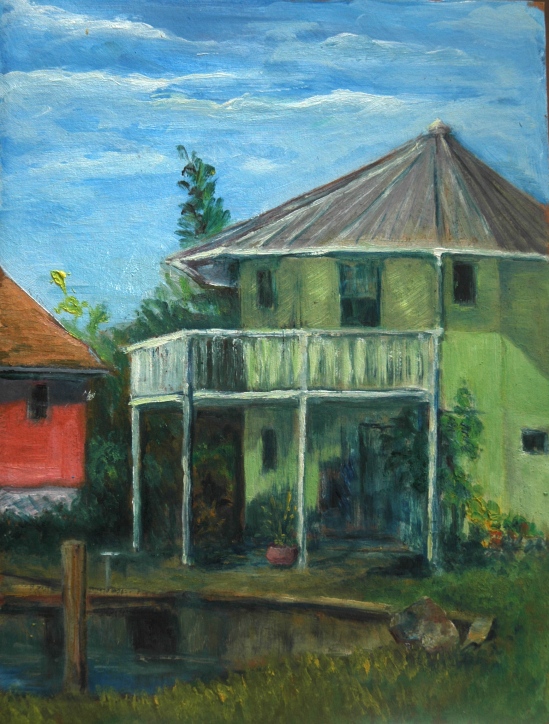 MarGood Park View from the Gazebo.  Our 2d visit to this spot.  Behind me was the skiff that I painted two days before.  It was while I was working on this scene that I got skiff-owner’s request to purchase my painting of his boat and his dog.  I posted that news here.  Pelican landed just in time to get included in the painting.

Dinner!  These are six of the 2 dozen blue crabs that I received in partial payment for the skiff-dog painting.  Don’t they look delicious?  (I think they were blue before being steamed.) 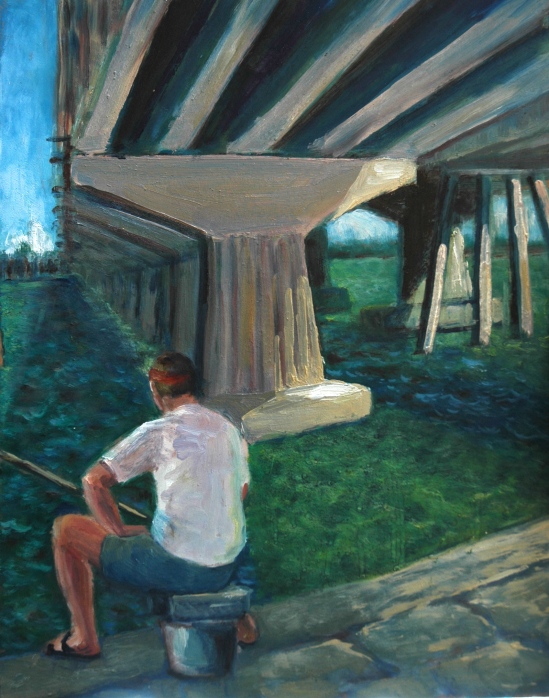 Fishing under the Jolley Bridge.  Had highest hopes for this one, but now worry it has missed the mark.  There is a slight curve in the bridge, so don’t get on my case about perspective! 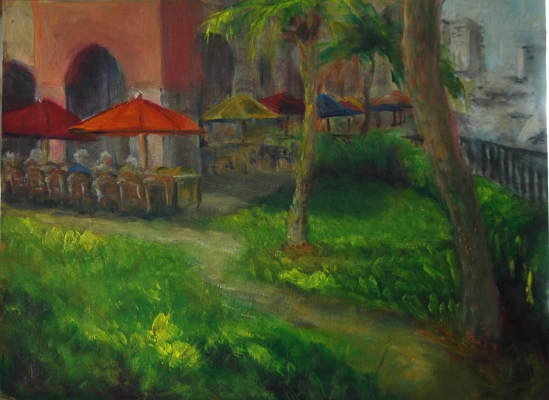 Waterside Dining.  That’s how they characterize it.  I left out the blue dolphin that Mary chose to feature.  Dolphins all over the city, like moose sculptures in NH.  Cows in Chicago.  Gnus in New London.  (look it up)

Two Tiny Visitors to Residents Beach.  What?  You don’t see them?  I thought they were warblers, but the bird book suggests they are more likely wrens.  Also met my first Red Knots and Brewer’s Blackbirds in the course of making this painting.  (Beach is to the right, past the vegetation barrier.)

Morning of my Travel Day: San Marco R.C. Church.  Foreground, what foreground?  What can you do with a parking lot? Had to pack up and catch plane in afternoon, so I forgot to get photo of Mary’s version, which was excellent.

I hope that adds up to fourteen.  I wish I had a better photo of number 15, which I had to leave in Florida with its happy new owner.  I took a photo of Stephen holding his painting, but it turned out horrible.  Here instead is a photo of my collector, which I lifted from the Naples Daily News, online edition. 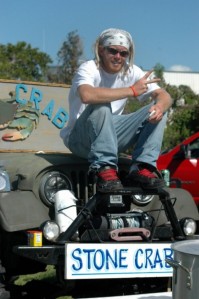 He may look like he only knows about collecting (and cooking) crabs, but he is also experienced in matting and framing, so the painting is in the best of hands.  I asked him to send photo of painting when and as framed.

at the Hatfield Gallery in Manchester (Langer Place, 55 S. Commercial St., Manchester, NH); at the Bartlett Inn in Bartlett; at the Red Jacket Inn in North Conway;  at her law offices at 41 Brook St in Manchester; and at her studio by appointment.

Through March 29, you can also view (and purchase–of course!) my 6×6’s at the Artstream Gallery in Rochester, NH.

If you happen to be near Tampa, Florida on March 7, 8, and 9, you could (and should) catch Nude Nite, happening with music and other entertainment at 3606 E. 4th Ave., in Tampa.  Hours are 6 pm to midnight.  (Nude NITE, after all)