You may not have noticed, but I did not publish my usual post the week of September 30, or the week of October 7. Before Friday evening, I had been drafting a post  in my head;  I planned to use it to mull over the phenomenon of retirement generating more “optional” stuff to do and the psychology of slowing down anyway just because the pressure of earning a living has been lifted.  Thinking philosophically or finding excuses, whichever you prefer.

But before I could commit those weak ramblings to the ether, an event occurred that provides a better explanation of my inability to perform at peak levels for the past weeks–perhaps the past few months, even.  Unsurprisingly, I am all over that new, more concrete excuse, like a rat diving on cheese, and say in celebration, hail to the UTI and its curability with antibiotics.

How it all went down:  I had been feeling kinda crummy for a few days, and even had a spell of faintness, but nothing interfered with my performance of essential tasks.  I got to appointments, shopped for pet food, cooked, etc.  Suddenly, late Friday afternoon, in the middle of trying to reconcile a bank deposit for one of my nonprofit organizations, I started to feel really chilly.  I suspended that banking task and went to prepare an early dinner.  I turned on the central heat and plugged in a space heater.  I kept getting colder.  By the time my hamburgers were ready to be served, perhaps only ten minutes, I was shaking uncontrollably–paroxysms might be the right word.  I couldn’t talk, much less drive.  Ambulance was called–by my 17-year-old granddaughter.  Big scare put into family.  Not so  much me– I could not focus on anything except my desire to get warm.  After a few hours of hydrating and testing in the ER, Good News!  I was in terrific health but for this one thing, a UTI (urinary tract infection), curable with the right antibiotic (Cipro).  The doctor said something about the infection being well-established, suggesting it had been present in my system for a while.  That got me thinking of a health event that occurred on my way to Castine, back in July, which I could not explain.  I looked up the symptoms (vomiting with lower back pain), but didn’t follow up with my doctor because  the symptoms evaporated.

This morning I was infused with a microburst of energy, which resulted in the images that I will be sharing with you below.  In the past three weeks, I have been more prolific than would appear from this meager supply of five images.  The weekend of the Blackstone Valley Plein Air Competition resulted in four paintings.  I forgot to photograph any of them, and had to leave them there for another month.  One has been sold, and if the other three are too, we shall be at the mercy of the buyers for decent reproductions.  It was a marvelous weekend, and I will go again next year if invited.  I’ll save the details for when I actually have visuals to go along.  Two additional paintings are at the Institute, drying.  They are from my fall semester class with Patrick McCay, called “Explore, Express, Exploit”.  They should be ready for photographing next week.

Here is the painting I made of Dennis on the Tuesday before Blackstone Valley:

I complained a lot about the plaid shirt, but I secretly was enjoying the challenge.  Looking at it now, from a new perspective, I admire the casual but effective depiction of his feet.

After Blackstone, I hit the ground running.  Well, painting.  I met up with the Cornwall Four (including me, four of us who took Cameron Bennett’s “Inspired by Cornwall” workshop in August) at a new water location in Auburn.  I identified it today from a map as Clark Pond:

The scene had everything–almost too much–bridge, the start of fall foliage, water, reflections, lily pads.  Yet I added the rock formations on the left; really, they added themselves.  The lily pads raft together to form little islands, which may confuse the eye.  One of the first lessons that I learned in my first landscape painting experience, from Stanley Moeller in 2005, had to do with water lilies.  He told me to underline them with “black”  (darkest of pigment, which was not necessarily black) to indicate the shadow they cast upon the water.  I couldn’t see but the thinnest of shadows, but he said “Trust me” and I did.  And do.  Still heeding his advice, I added the most delicate and unobtrusive of shadows under my pads.  This painting came under critical review by Peter Clive last Monday at MAA and when I am more of myself, I will be making some perfecting changes–playing down the reflections of tree trunks in the water; playing up the light on the rocks and bridge; settling down the water on the other side of the bridge, which doesn’t recede like it should.

The next day being Tuesday, I did a figurative of new model (to us) Michael, but I don’t like it, so I’m not showing it to you.  Wednesday, I was back to Clark Pond: 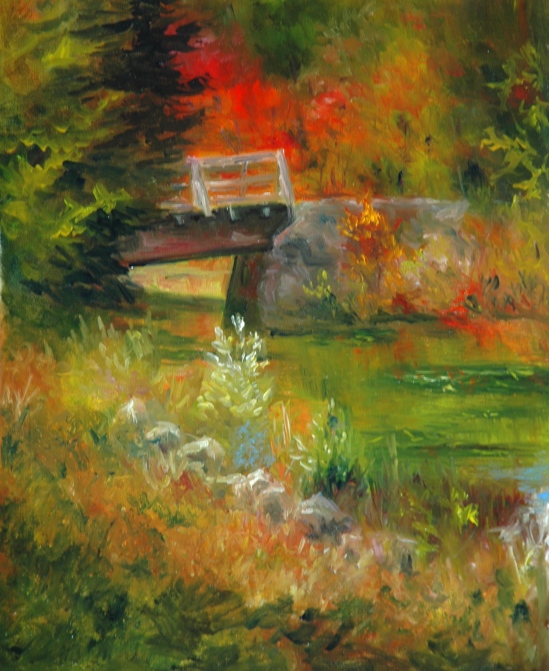 What a difference two days made!  We have liftoff!   (Fall foliage is a Big Deal here, where tourists flock jus to stare at our trees.  How strange is that?)

I wasn’t feeling too great last Tuesday, when I painted this new figurative featuring Margaret.  I get a lot of kidding about how fast I paint, so Tuesday, someone commented that I wasn’t going as fast as usual.  I felt that too, and hoped the slowing down was for the better.  I concentrated on the flesh tones, trying to get them just so, a la Steve Assael.  Now I’m wondering if it was just the UTI manifesting itself in sluggish behavior.

Friday morning we got together in the back of East Colony Fine Art Gallery to try it out as a location for figure study.  The podium is quite high since it started life as a work table.  The lighting is abominable since it consists of fluorescents over a worktable.  But there was room enough for my core group of artists, and plenty of easels.  Along with Margaret posing nude, my daughter Nancy posed clothed.  Nancy was “shadowing” Margaret to see if modeling is something she could do.  Naturally, I chose to paint Nancy:

Another plaid shirt.  She has my mother’s admirably straight nose.  We had the fluorescents off and a small spotlight on our models.

That night, of course, was the night of the ER, and I have been recovering ever since.  Now that I know what symptoms I should have noticed before, I am noticing them, but my fatigue should never have been overlookable.   I suspect the paroxysms of shivering took a lot out of me.  On the bright side, the back pain I have been putting up with for weeks has subsided–not arthritis after all!

Bottom line, I have been shirking all but the most imperative of duties.  One of those duties: I took upon myself a viewing of “Gravity” 3D on the iMax screen.  I heard it should not be viewed any other way, and I was worried I would miss out if I didn’t act today.  I can now report that the advice was justified, and worth the prioritizing.

The rest of this week will be taken up with Tuesday Life Group, trip to Boston to collect my painting at the Arboretum, and bridge–all on Tuesday, Adrienne’s Fall Figure Marathon all day Wednesday, docent training at the Currier and my Triple E class with Patrick, Thursday, then a drive to Bartlett for the 3-day Fall Artists’ Getaway Weekend.  Glad I found out what ails me before all that went down!

at the Hatfield Gallery and the East Colony Fine Art Gallery in Manchester (both are in Langer Place, 55 S. Commercial St., Manchester, NH);  at the Bartlett Inn in Bartlett; at the Red Jacket Inn in North Conway;  at the law offices of Mesmer and Deleault at 41 Brook St in Manchester;  at the Epsom Library in Epsom, NH; at the Manchester office of Congresswoman Carol Shea Porter;  and at her studio by appointment.

9 responses to “Health Matters, yes it does!”