I have continued to be Very Bad and Unrepentant.  Finding oneself takes time.  I had to write an artist’s bio last week, and instead of reciting biographical facts about myselves, I skipped merrily over past incarnations to state affirmatively–I’m all mixed up but happily so.  Here is how I put it:

Pursuing a profession in the arts is inevitably a struggle because excellence is never actually attained. One is always reaching. Aline has found herself reaching in more than one direction at a time, which for a long time has confused her and perhaps worried her followers. But she now has decided to embrace the diversity of her subject matter and styles and celebrate each on its own terms. Her style ranges from loose and impressionistic to refined and deliberate. Meanwhile, she has served notice that she will be experimenting with abstracted landscapes as well.

And indeed I do today have something to show for that last bold statement.  I attended a three-day workshop on Abstracting the Landscape with Barbara Danser, who teaches at the NH Institute of Art but last weekend (yes, including Mother’s Day) was teaching for the Currier Art School (an offshoot of the Currier Museum of Art, which I serve as a docent).  Barbara started us off slow, with a photograph that we chose from many that she had ready.  Then she had us paint the same scene without referring to the photo.  I believe the purpose might have been to divorce us from the details and focus us on the big picture  (so to speak).  Also to this end, I believe, she imposed time limits as a way of weaning us away from detail in our paintings.  In the beginning, the limit was fifteen minutes for each effort.  Later on, she allowed us 30 minutes, perhaps even more when she saw us close to accomplishing something.

From memory of photo

After that one use of a photo for inspiration, Barbara gave us “Prompts” as inspiration.  The first one involved a female walking on a beach in the mist. 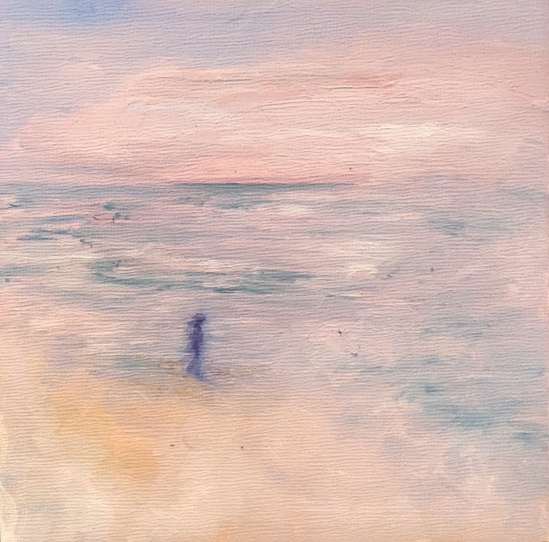 For the next one, she played some music.  I wish I could remember what it was–classical for sure.  Debussy? 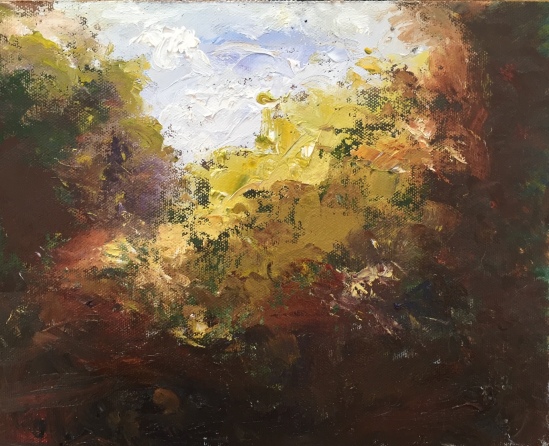 From a musical prompt

I deployed my palette knife more than usual because that is a faster way to lay down lots of paint.  Once I had the paint on the panel, I could move it around.  I had been using paper to paint on, but with the one above, I used a panel that I had previously painted on.  There is no trace of the original painting showing through.

After lunch on the first day (Friday), Barbara gave us another photo to work from:  that of a wave.  We had a choice of waves.  I chose the more dramatic of the two:

Naturally, we then had to paint the same wave from memory: 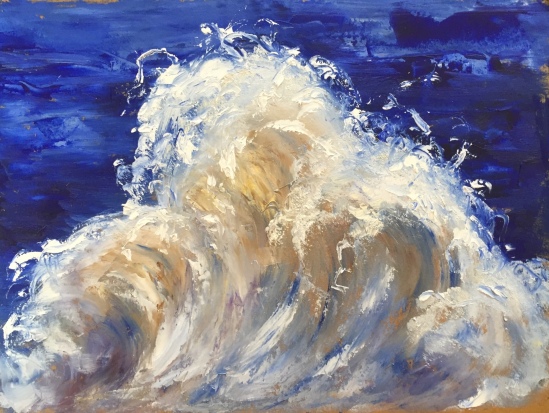 After the wave, we got no more photos to use as references, but we examined the works of other abstract landscapists to get us in the mood.  I also found myself mentally referring back to paintings I had painted years ago, which was a little spooky.

The sequence of the next seven paintings, and the specific prompts for each one, has gotten a little muddled in my mind.  What I can remember about each one I have put in the caption, which I believe you will be able to read if you click on the image.  All of them were either 8×10 or 9×12, but I have accepted WordPress’s suggestion for varying the apparent sizes.

no idea where this came from 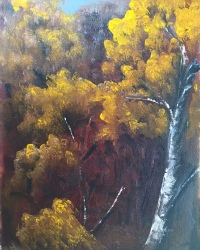 At the Bartlett Inn in Bartlett;  at the Bernerhof Inn in Glen; at the Red Jacket Inn in North Conway;  at the New Hampshire Antique Co-op in Milford;  at the Norris Cotton Cancer Center in Manchester, part of the Healing with Art program; and at the law offices of Mesmer and Deleault at 41 Brook St in Manchester.

And save the date of Wednesday, June 22 for a reception at Labelle Winery in Bedford of the Petals 2 Paint event whereat floral designers create live flower arrangements inspired by a painting.  This is an annual event of the East Colony Fine Art artists and seems likely to be their last show as a group.  The flowers don’t last more than a couple of days, so  you might as well plan to come for the reception.