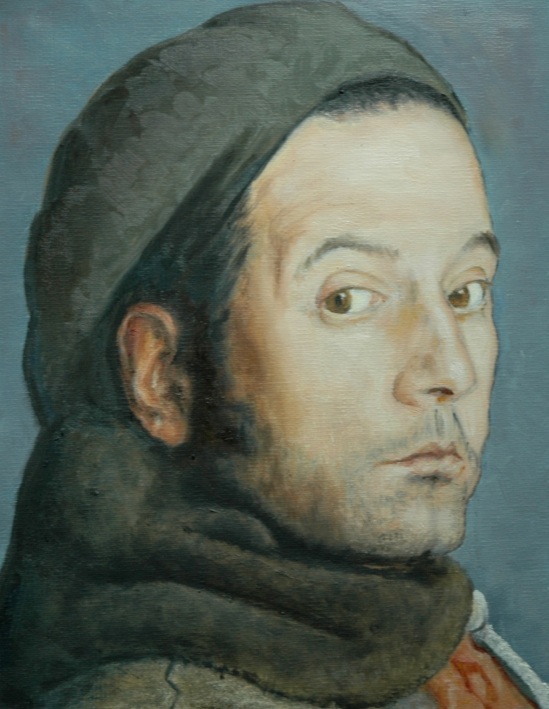 Above is the final version of my copy of the Annigoni self-portrait. This is what I had to show the class and the Critic Supreme, Cameron Bennett. I wish I could remember his exact words, but they were more complimentary than usual, and he concluded by saying I should post it on my blog. I had to confess that not only had I already having done so, but I also solicited suggestions, which I took, on things to fix.

But not everything got fixed, because after the compliments, he and my classmates proceeded to tear it apart. Here, for the sake of comparison, are both new and old versions of my copy, against the original, which is in the middle:

He rejected my own observation about the face being too wide; that was an illusion caused by the ear being too low. Also the nose was too tipped up, the nostril shadow not extended enough, and the eyes too wide open. Each issue is a matter of millimeters. Millimeters matter. If there were something smaller than a millimeter, it too would matter.

That exercise entailed the drawing of the portrait before the painting of it. Once you have labored over a drawing, the painting phase becomes semi-automatic. As long as you get the colors right, and stay within the lines you have drawn, the portrait comes out okay. This week our assignment is to copy a portrait by a Russian painter (Valentin Serov, one of the greatest Russian portraitists of his time, according to this website) using the “direct painting” method. Skip the drawing. You start by painting an oval for the head. After the outside shape has been refined, you may begin to suggest features within that shape using midtones and shadows. Here is where I was with my copy last night–original is the one on the right:

This morning I corrected the eyebrow on the right; it was arching a little too far to the right. There’s something not quite right with that eye, but I’m not sure whether it is the size or the shape, or both. The iris just seems to be popping out of her head. Perhaps I need to narrow the entire head.

Saturday I finally got outside for a little plein air painting. I joined other members of the NH Plein Air group to help celebrate “Eight Days of Weeks.” A NH native, John Weeks, was instrumental in the passage of the Weeks Act 100 years ago, without which we would have no national forests. So each Saturday during the month of August, we are organizing painting forays to northern New Hampshire, which is dominated by the White Mountains National Forest. For this first Saturday, we were determined to get an early start so as to paint the Turkey Jim Covered Bridge in Campton in the morning, then move to the Forest center in Lincoln for the afternoon. At three o’clock we would then have two wet paintings to offer for sale at the center.

Alas, we couldn’t find Turkey Jim Covered Bridge. This is a bridge now closed to vehicular traffic but looking delightfully paintable in its disrepair–from photographs. Mapquest led us to a point near its western terminus, but we didn’t know that and even if we had, we would have had to climb fences. (Not feasible with painting gear.) Then first one then another “native” gave us bad directions. When we finally found the correct road with the help of a third native , it led us to a field bursting at the seams with RVs, waiting for a bluegrass festival to begin. We managed to talk our way through the field to the other side where our bridge awaited, without buying tickets to the concert. Our reward for all this extra effort and lost time? No good place to set up easels. The only good view of the bridge was from the middle of the stream.

So off to Plan B, Otter Rocks on the Kancamagus Highway, in the White Mountains National Forest east of Lincoln, NH. We picked up lunch in Lincoln and arrived at Otter Rocks about 11 a.m. to find a picnic table waiting for us at a particularly good vantage point for painting the rocks. I ate my sandwich and started painting without changing position.

Otter Rocks was brimming with families Saturday, plus one really interesting dog. I wish I could have included the dog in my painting, but getting those two figures in there was effort enough. I waited until I had most of my painting completed before even considering figures. The painting was thick with paint by then. I focussed for a second on an appealing father-daughter pair and

tried to freeze that image in my brain. By the time I had scraped away excess paint to make room for my figures, the father had stood up and I was on my own. Apart from the original gesture, my figures bear no resemblance to the real people who inspired them.

In September, I am taking yet another Master Class workshop, this one with Stan Moeller; he promises to teach us how to people a landscape en plein air. It is definitely something at which he excels. Check out his paintings here. I sure hope he has some tricks to teach us. I was fortunate to have taken landscape painting with Stan at the Institute when I began to paint in 2005. He wasn’t including figures much then. Now he paints hardly anything in which a figure is not the focal point. I want to do the same.

Oh yes–the Rest of the Story. No one came to the wet painting sale. But we shall try again next week because the Flume is scheduled as the site of the next wet painting sale. If we can get into the Flume to paint, chances are better that some visitors will turn into art collectors. The Northern Arts Alliance and other Eight Days of Weeks organizations are to receive a 30% commission on all wet painting sales, although they will have done little to earn that. We had to fashion our own price labels out of scrap paper and prop up our paintings against a fence. Maybe they didn’t expect us to actually show up. Now they know. Crazy artists!