People are always urging artists to get out of their comfort zone.  What exactly is wrong with a comfort zone, anyway?  I wish I knew — I wish there was something  that I could nail every time out.   But there are certainly ways of making art that I am more comfortable with than others, and I’m not talking about the difference between painting in my studio or getting outside in zero degree weather.  I am most comfortable painting and drawing in a representational way, in a traditional way, in oils, on a stretched canvas, panel, or in the case of the drawings, a pad of paper.

This week I have decided to go public with three new things that are out of my comfort zone.  Two of the three are combined:  (1) Painting on glass.  (2) Painting with acrylic paint instead of oil, on said glass.  The third:  Painting symbolically, as opposed to realistically.

First, the reverse-painting-on-glass project.  A client bought an old clock at auction that boasted a glass panel reverse-painted with a once-lovely bucolic landscape.  The paint was peeling and  flaking off the glass.  Here is what it looks like :

He asked me to replicate, roughly, this scene freshly painted on a new pane of glass.  I did some research, and discovered that you can use either oil or acrylic for reverse-glass painting, but acrylics are preferred because of the faster drying time.  I already had some acrylic paint, which I use to tone canvases before painting with oils.  (You can paint with oil over an acrylic base, but should not paint with acrylic over an oil base–for fear of the oil not having dried completely underneath–maybe that is what caused the above painting to start to crumble.)  Except for the gold, which I have only in oil paint, I used my acrylics to make this loose reproduction: 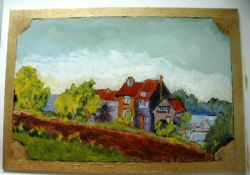 painted side of reproduction

My client did not mind if I reversed the image, so I traced the image with black pen right onto the surface I intended to paint.  I wanted the black markings to show up  in the first layer.

Viewing side of reproduction

I need to work on the gold “frame” and plug up some holes, but basically this is it.  The only way to change anything is to scrape off and start over.

My other uncomfortable project takes a bit more explanation.  I belong to an organization called “Women’s Caucus for Art“.  I am on the Board of Directions for the NH chapter, and also serve as Treasurer for the NH chapter.   Every year the WCA organizes a number of funky exhibits.  I have mentioned the 6×6 here, and I have participated in the annual “Flowers, Interpreted”, and my “Farmers Market” painting was juried into an exhibit on a theme of locally grown food.  My offering for one called “Old Wives Tales” up at Plymouth State College did not make it, nor did my very first submission a few years ago to an exhibit of female nudes called “Go Figure”.   When I saw the art selected, I better understood the meaning of the title.

Point is, they do some weird stuff that my rather sober, traditional take on on images does not fit into, comfortably.  But good sport that I am, I keep trying.  So here is this new one, called “On Target”.  For this exhibit, one must use this as one’s inspiration: 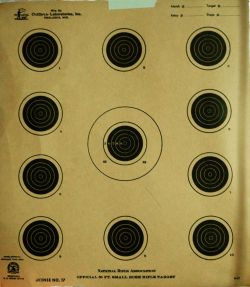 The "On Target" inspiration piece

My first reaction was, “Huh?”  That was my second and third reaction too.  How on earth do I fit that thing into my way of being artistic?  Coincidentally, I had recently watched a movie called “Vincent” by Paul Cox.  Van Gogh is one of my favorite artists.  The movie consists of Van Gogh’s words, written in letters to his brother, recited against images of his paintings and the countryside that he painted, and a few reenactments of his painting process.  I was particularly affected by the reenactment of his painting of “Starry Night”.   Suddenly, it came to me that the targets were very similar in shape (you know, round!) to stars, and that the circles around them were analogous to the  auras that surrounded the stars in Starry Night.  All I had to do was reverse the colors.  I was inspired!  So inspired that I jumped on it right away and spent all of  yesterday on it:

Starry, Starry Night, under its inspiration

I am titling it “Starry, Starry Night” after the Don Maclean song, because that opening theme keeps running through my mind.   As always, it may not be finished yet.   Actually, it may be just my first stab at bringing this idea to fruition.  Does it have enough merit to make it into the “On Target” exhibition?  Stay tuned for word on that.  But if satisfying the theme counts heavily, I think it should.  What think you?  Here is the large, in your face, version: 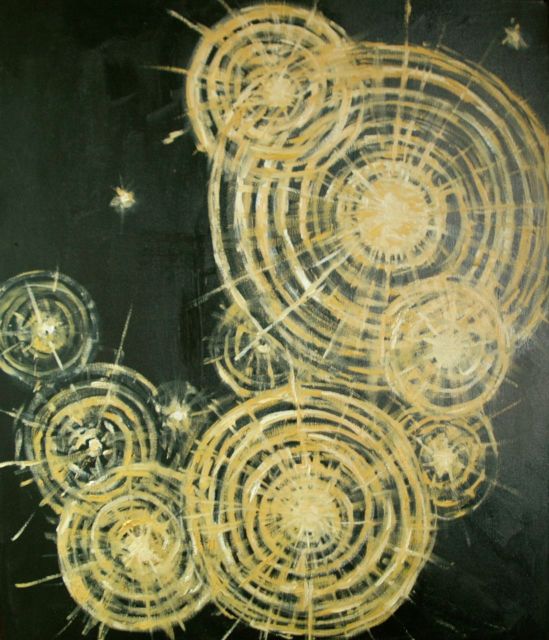 8 responses to “Out of the Comfort Zone”