You can’t wait until the last minute to prepare for a show. I started by ordering a modest number of new frames intended to accommodate my recent paintings of nudes on unstretched canvas, with the mixed results that I described in last week’s blog. This week, while waiting for the second order of frames to come in, I framed up what I could, and worked on those 12×16 canvases that needed paint to the edges. So far, I have nine “studies” from this spring and summer all framed and ready to pack, and five 20×16 more fully realized nudes framed and boxed. Three more 12×16 edge-painted studies and the five waiting on the new frames brings the total to 22. There is at least one portrait of a clothed model included in the collection, and I may bring along other recent figure or portrait paintings. I have to keep in mind that I may be doing this on my own.

Since of the nine studies I have framed there are two that you have not yet seen, I decided to photograph all nine in their frames. But first, the painting from yesterday, which cannot be framed yet:

Now for the nine, in chronological order to the best of my memory:

This was one of my experiments with the palette knife, and the first of four paintings from the same pose. The second is waiting to be framed as a 12×16 after being painted to the edge. The third, a head portrait and another knife painting, may be left home. The fourth is one of the 20×16 framed and already boxed. 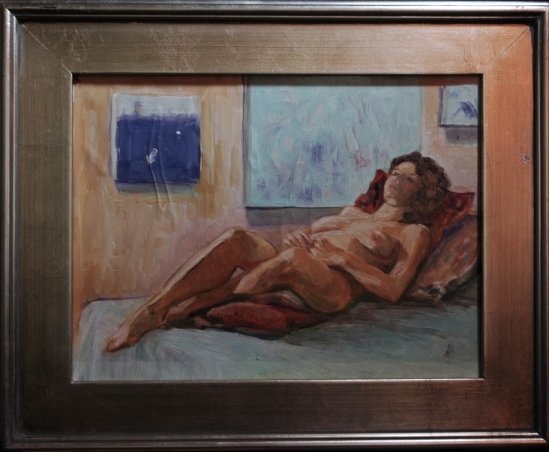 In the Artist’s Studio

This would have been my pride and joy, but I ruined it with a sloppy mount. Lesson learned. It will be on display but not for sale.

In this photograph you can judge the new frames that I ordered specially for my nude studies. They have a subtle scrolling that harks back to olden times, as befits paintings of nudes, ironically in our liberated age not often displayed. This painting is one of my resizing victims (from 11×16 down to 11×14).

In the Artist’s Studio, Green Drape

I wanted to crop this one, but could not sacrifice either the elbow or the foot, so I had to extend the green drape to the bottom edge. Note to future generations of art lovers: it would OK with me if you were to reframe this one with the bottom one inch cut off.

This is the only one of the 22 that looks better in a black frame than in silver or gold. 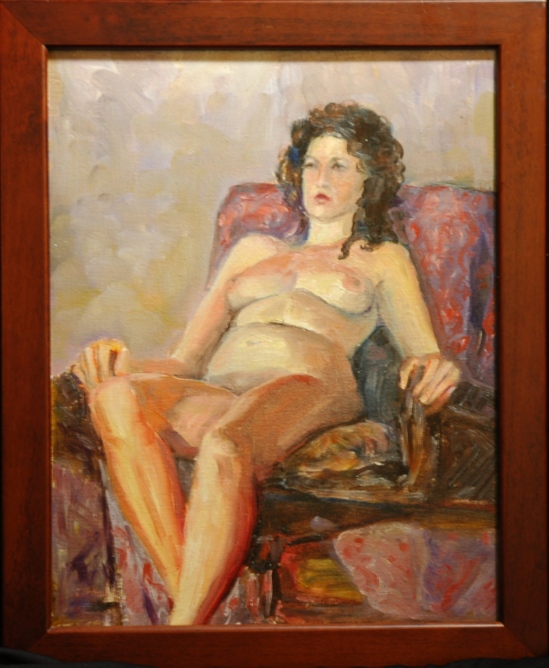 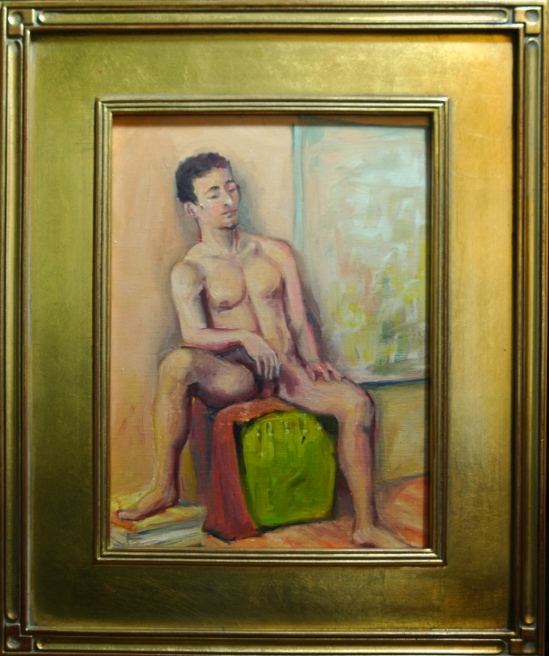 In the Artist’s Studio, Green Hassock

3 responses to “Prepping for A Show of Nudes”