I have saved up a number of challenge paintings for this post.  The challenges came from the subject matter.  Although landscapes in general are less demanding than other genres because nature is so variable in its beauty, the same cannot be said when architecture, vehicles or people become prominent in the scene.  Perhaps I have been setting myself up for a higher failure rate.  But I can’t learn if I stick to easy subjects.  I’m not sure which of these are failures and which are the successful embodiment of a new direction in my artistry.  I’m feeling my way, so to speak, across the landscape of my creativity.

First, a large (20×16) rendition from a photograph taken when I realized I had forgotten my chair.  I simply cannot stand to paint for two hours at an easel.  Old bones, or something like that.  So I photographed my inspiration and tried not to become a servant of the photo.  This is a vacant mill (it is for sale) in the Town of Newport, New Hampshire. 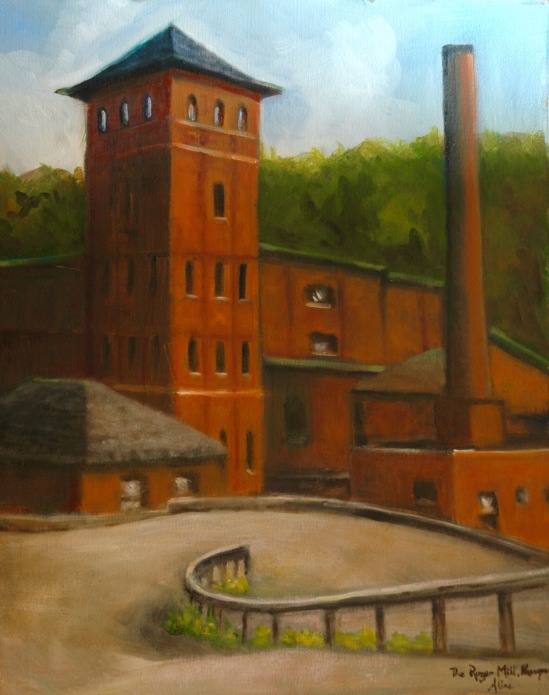 The lead in to this view of these sunken buildings intrigued me the most:  that curvy downward driveway must have been a nightmare when shifts changed.  The river that powered the mill flows out of sight in the back of the buildings.  I believe that same river is the waterway that led to my next Newport painting.  A one-lane covered bridge next to a rolling park is a kind of hybrid between straight landscape and architecture, but no one can deny a bridge is a construct subject to the laws of perspective.  It was threatening rain the day I was in Newport for this painting, and after I scouted the various aspects of the bridge, it did rain, furiously.  I waited.  After all, I was several hours away from home and there wasn’t any reason to hurry home.  After about 20 minutes I got lucky.  The rain stopped and the sun even came out intermittently.  For an hour.  Suddenly–that means without warning–it started raining hard again so I packed up quickly and headed home.

I studied the quick block-in long and hard.  I knew the perspective was probably wrong.  The bridge was level, but looks as if it is slanted upward in my painting.  The reflection reinforces that notion.  I consulted the photograph taken when I was scouting, and it shows a bridge going straight and level.  But I really, really wanted to trust what I blocked in at the site.  After all, I was seated while painting, and I had been standing to take photographs.  If I changed the bridge and the reflections, I would have all those stripey shapes that I hate so much.  Ergo, slant stays.  For the good of the art.

Again this year I participated in the paint-out fundraiser for the American Independence Museum in Exeter.  I had scouted locations the day before, when I was delivering paintings to our pop-up gallery on Water Street, and spied a good riverfront vantage point on private property that had a sign warning “No Trespassing Fishing . . . [other forbidden activities]”.  There was nevertheless a guy fishing .  I asked him about the sign, whether it was vigorously enforced.  “What sign?” he asked.   He had never noticed, but it didn’t matter:  he lived in the condo complex and gave me permission to paint there the next day.  First, I painted the buildings across the river, but I included a vigorous evergreen that partially blocked my view, instead of moving to the right where the shrub would not block my view.  That meant painting a close up of a potted plant, in addition to the architecture in the background, not to mention the river itself and a boat tied up to a landing.  I felt it might be possible because I had chosen a large panel, 16×12, for the project.  But the evergreen defeated me. 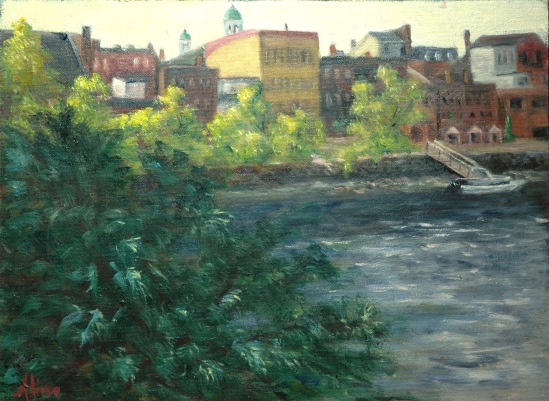 Almost from the same spot, I found a charming bridge that I wanted to paint.  The evergreen was in the way again.  For this one, I did stand up, because I really had to in order to see over the shrubbery.  But I knew I only had a hour to paint because the wet paintings were due back at the Museum for the wet paint sale, so I figured, for an hour I can stand.  Note the different treatment I tried out for the same shrub in the second painting.

Neither painting found a buyer, but in my haste to set up, I mispriced them as if they had been framed.  Just as well, because when I got them home, I improved on the shrubbery.  Not so much but I was happier.

Last week, I was back in Exeter to see if the pop-up needed any help.  It didn’t, so I went up Water Street and painted the scene looking down and back to where our gallery is.  Shrubbery was replaced by automobiles.  They moved in and out of the parking spots in front of me.  What can you do?  I never got a good enough handle on what existed behind the cars, so I had to include the cars.  Maybe I can develop that into a specialty!

Market Square in Portsmouth was the site of an organized paintout last Wednesday.  Only four painters that I was aware of, which including me and Flo, actually participated.  Flo and I settled on the shady corner kitty-corner from the dominant building, North Church, whence I included North Church and the street running to the right and down.  Blocking my view on the right was a tree and Flo, who painted the picturesque row of storefronts behind me.  It would not have been realistic to paint Market Square without vehicles or people.  So I grabbed a few impressions–one trolley and one van for vehicular traffic, and two couples for the human sort.  Traffic is so annoying; it moves.  The parked cars in Exeter were a piece of cake by comparison.

Last is the painting I did at the Farmers’ Market last Saturday in New Boston.  A call had gone out on the NH Plein Air list inviting plein air artists, and I answered the call.  I was the only one to do so.  I’m not sure, in retrospect, whether the idea was for the artist to be selling artwork or to be creating artwork.  I had assumed creating, because in years past I had done the same at the Bedford Farmers Market.  So I created.

For a little while, I had a group of musicians in the gazebo, but alas, they had to leave after an hour, and without warning!  Well, challenges, right?  Another difficulty was the Dogwood tree.  Since it was in the foreground, like the nasty evergreen shrub in Exeter, I felt I had to do more than suggest a generic tree with white blossoms.  It should convey the idea of a dogwood tree.  Conveying the idea of musicians was much easier!  Go figure!  (Pun not intended.)

So there’s an assortment.  Is anything happening here in terms of this Painter’s Progress?

with the East Colony  artists for the rest of June and all of July at 163 (167) Water Street, Exeter, NH; at the Bedford Public Library; at the Bartlett Inn in Bartlett;  at the Bernerhof Inn in Glen; at the Red Jacket Inn in North Conway;  at the NH Institute of Art, 77 Amherst St., Manchester; and at the law offices of Mesmer and Deleault at 41 Brook St in Manchester.