Every year in June, our NH Plein Air group organizes an outing to Lupine country.  “Lupine country” in NH means primarily Sugar Hill, because Sugar Hill encourages the propagation of lupines in support of its annual Lupine Festival.  Sugar Hill is a drive of about two hours from Manchester, where I am.  But great lupine patches do exist elsewhere.  You might therefore think we are a little mad to drive for two hours to find paintable lupines when we could find a closer patch, or even create our own patch at home, given proper conditions.  But we plein air painters are a travelin’ sort, and we would hike into the wilderness for miles when younger and just as mad.  For an example of such a mad artist/hiker/camper, see this blog.

(“Lupine”, also spelled “lupin”, is pronounced with a short “i”, although one online authority allowed as how the long “i” is OK when the word is used as an adjective.  For example, we went to lupIne country to find lupins.  I only bring it up because there seems to be a difference of pronunciation in these here parts.)

My companion on this year’s lupine hunt was Flo Parlangeli.  As if a two-hour drive wasn’t long enough, the adventurous spirit in which we set out Wednesday morning motivated us to take a detour around the Pemigewasset Wilderness, through Crawford Notch, where we had heard of a glorious lupine patch in years gone past.  Alas, tales of its demise had not been exaggerated, but enough remained to justify a quick painting from each of us. 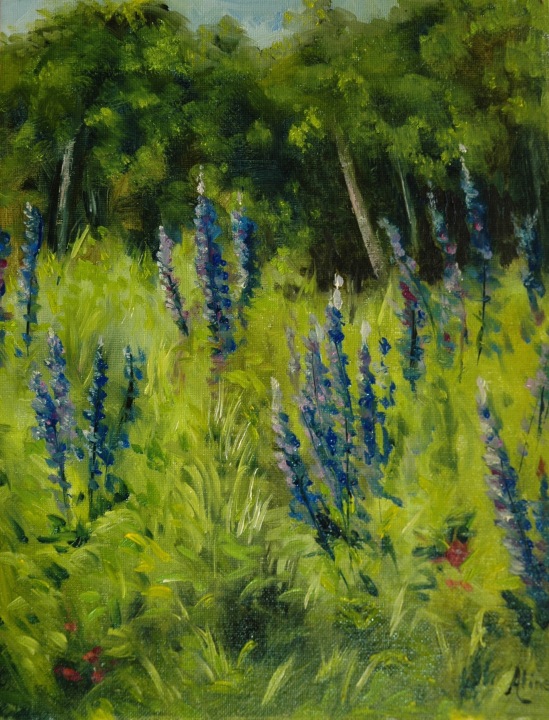 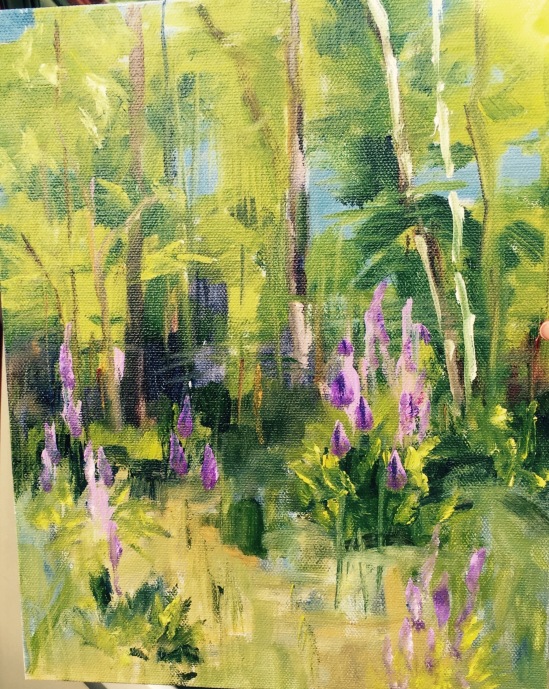 Lupines are predominantly blue or purple up here, but pink and white exist in small numbers.  As you can see, I prefer blue lupines to purple lupines, so I exaggerate in that direction.  The blue of lupines has been something that has frustrated me from the beginning.  Back in 2009 on my first foray (just before I started blogging, so there’s no entry recording that experience), I thought it was the Ultramarine Blue that was preventing me from getting just the right shade of violet.  Today, looking back, I realize that my red must have been the culprit–it must have leaned toward orange, so when mixed with blue, the hues were neutralized toward brown.  My next stab at lupines occurred in 2011, with better results, I just revisited my blog entry and found this tidbit of wisdom, which I had forgotten between then and now:

Unfortunately, the image that I used to illustrate the above statement does not now seem to me to be effective in that regard. 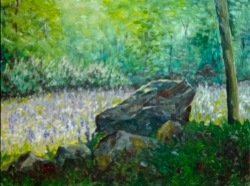 Field of Lupines in Jaffrey

Then in 2013, Stab No. 3  but I was still not entirely satisfied that I had captured the essence of Lupinness (Lupinity?): 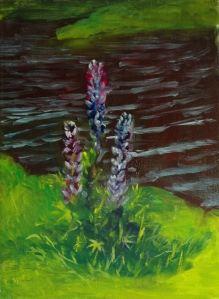 Wednesday, I took with me Magenta and three blues (Cerulean, Ultramarine and Cobalt).  After squeezing them all out on my palette, I kind of swirled them together in an effort to get the impression of purply blues in various proportions.  (Taking a leaf from the Impressionists playbook.)

After that hour in Crawford Notch, we headed back west to Sugar Hill country and proceeded to get  totally and inexcusably lost when we were within only a few miles of our goal.  Another hour wasted!  We remained cheerful because it was a perfect day in June and we were surrounded by wild loveliness, some of it the color of lupines.  After returning to Sugar Hill, we explored its usual offerings, but settled in a unexpectedly cozy spot across from the Sunset Hill Inn, next to the golf course parking lot.  (Sunset Hill House was the scene of two Snow Camps that I blogged about in years past.  Then it failed, and we ended up for Snow Camp last January at the Bartlett Inn.  But Sunset Hill Inn has opened in the same location, with renovations ongoing, solar panels installed on the roof, and a very welcoming Brit in charge.) 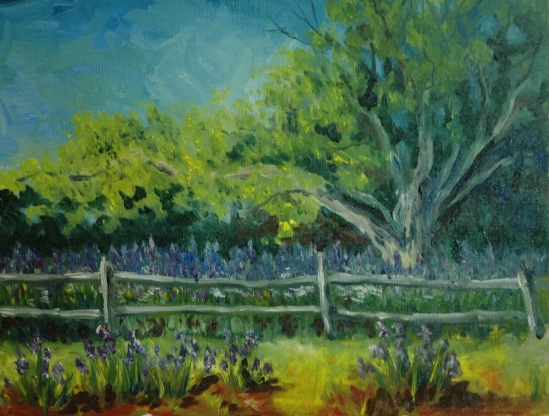 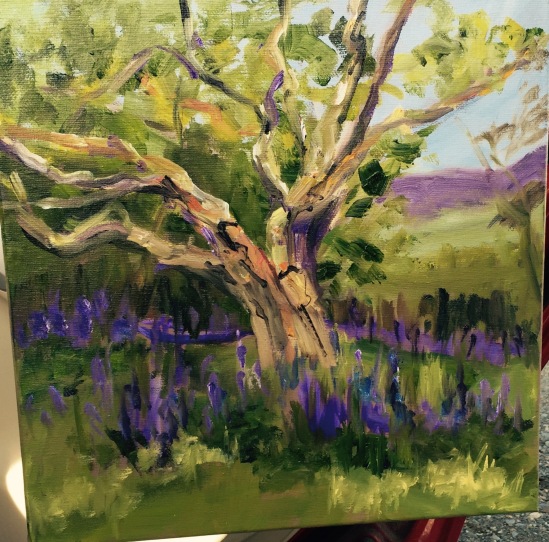 I must say that the photographs that I took of my own two paintings in my studio do not truly convey the lightness, the sunlightness, that exists in the originals.  But what else is new!  The only times I have seen photos that looked as good as the paintings is after they have been converted into giclee prints of the painting.

So what have I learned as a result of the lupine hunt and the writing of this blog?  Impressions of lupines work better than portraits of lupines.  Flo’s color sense is so amazing–notice how it led her to emphasize the deep purple of the flowers and the yellow tint in the gnarly tree.  I must work harder on not being literal.

Flo would say that hers are not finished paintings.  She intends to work them up in her studio, I think.  I considered making improvements to my two but decided against it.  Not that they are perfect, but they are what they are–an impression of a string of moments in a delightful spot on a delightful day in June.

However, I will be taking a second look, with Michael Chesley Johnson’s rediscovered advice in mind.  It is true that you can’t avoid getting some yellow from the surrounding greenness mixed into the blue–which grays back the purplyness (purplity?)

with the East Colony  artists for the rest of June at 163 (167) Water Street, Exeter, NH; at the Bedford Public Library; at the Bartlett Inn in Bartlett;  at the Bernerhof Inn in Glen; at the Red Jacket Inn in North Conway;  at the NH Institute of Art, 77 Amherst St., Manchester; and at the law offices of Mesmer and Deleault at 41 Brook St in Manchester.