I’ve had a bad week.  It started a week ago Friday night when I downloaded my bank statement and discovered all my money had vanished.  Someone had been systematically withdrawing a few hundred here, a few hundred there, using apparently a clone of my debit card.  I managed to freeze the card and send off agitated messages to the bank, but that was going to have to “it”  until Monday because I was committed for the entire weekend to “Art in Action”–a semi-annual event in Londonderry that combines display and demonstration.  The bad stuff continued the next morning–Saturday–when I was packing up my car with all the gear required for Art in Action:    My backpack could not be found.  This Creativo ArtPak backpack contained all of the supplies I was going to be using for the demonstrations:  Soltek easel, Rosemary brushes, Michael Harding oil paints, palette knives, brush holder, brush washer with Gamsol, brush tube, little container of Liquin–all inexplicably gone.  And I could not do a damn thing about it until Monday.   Fortunately, I’m big into redundancy, so had no problem gathering up a backup easel, paints, brushes.  I even had a second brush washer.  Off I went to Londonderry, with my little Prius loaded down with display panels and 8 paintings (the display), and my two helpers sharing the front passenger’s seat.  The helpers were my daughter, who would also serve as my model, and my boarder, who performed as the muscle.

Whereupon an interesting phenomenon revealed itself:  despite, or because of, the stress I must have been suffering  subconsciously, I was easily able to zone in on my painting.  Maybe I zoned too much, to the point of ignoring the small streams of people flowing past me, instead of engaging them like I was supposed to.  Some kind of compulsion held sway over me; perhaps I just needed the escape from daily woes that always comes from surrendering to the art.  Whatever, I turned out some good stuff to show you and was looking forward to getting them published last Monday . . . when the knockout blow came.  I found out that the perpetrator of my losses was someone whom I had loved and trusted.  There would be no more escape into painting for the rest of the week as I juggled that mess alongside urgent tasks and important meetings related to my many volunteer activities.

The crisis is over.  The bank has restored the funds to me and the perp found another patsy to cover the theft so as to avoid prosecution from the bank; and my homeowners insurance is covering the loss of the backpack.  I am starting to sleep better.  The hole in my life that represented a certain loved one is still empty and most likely will stay that way permanently.  But I am moving on.  So here, a week late, are the three paintings I was working on during the Art in Action show.

For the first one, I asked my daughter to sit for her portrait again (she did this for me at last Spring’s Art in Action ).  I didn’t want to include her dog this  year as I wanted to complete a more serious oeuvre.  I had a spotlight lighting up her right side and a black drape behind her.  We started about 10:30 and I declared it finished about 2:30.  Nancy looks sad and tired, and that was her on that day. But she loves the painting and my portrayal of her.  Can’t ask much more from a portrait. 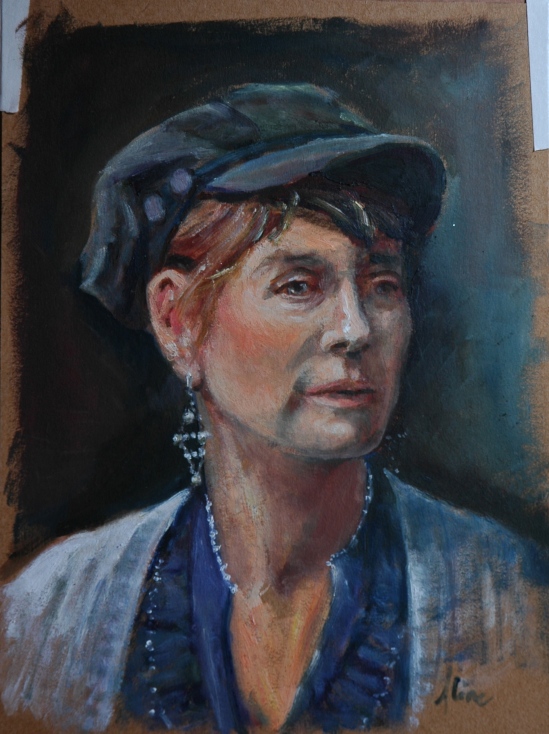 Portrait of my daughter

The next day, Sunday, I worked from a  photo that another artist, Rollande Rouselle, had emailed to me with assurances that copying rights belonged to her.  She wanted to see what I could do with it.

I had it on my iPad and was able to set up the iPad practically next to my easel.  I cropped the photo in order to enlarge the facial features.

The hardest element was the bundle of sticks, but I worked at it until the blobs of paint conveyed the idea, and then I quit.

I still had about an hour left so then I picked out a photo of a cat from a book of cat photos, and got this far on it. 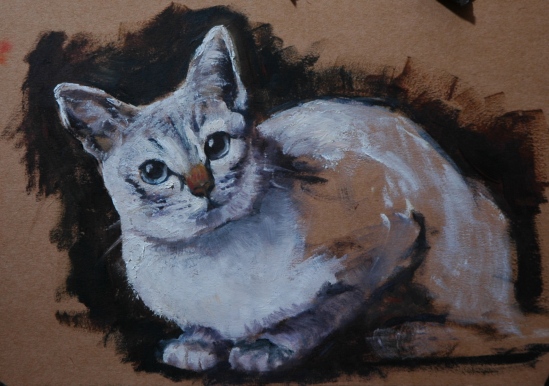 My efforts to paint the perfect “Fur” a few months ago stood me in good stead.  Should I finish?  Once  you get the eyes of a cat, the rest is window-dressing.

at the Hatfield Gallery and the East Colony Fine Art Gallery in Manchester (both are in Langer Place, 55 S. Commercial St., Manchester, NH); at the Bartlett Inn and Bernerhof Inn in Bartlett; at the Red Jacket Inn in North Conway; at the law offices of Mesmer and Deleault at 41 Brook St in Manchester; at the Manchester office of Congresswoman Carol Shea Porter; in the lower level of the Bedford Public Library, Bedford, NH; and at her studio by appointment (email: alotter@mac.com).

You may also view paintings with prices and order prints at my Fine Art America page. If the painting you are interested in is not there, or if you prefer to bypass that experience, you may contact me using the private feedback form below. If you want to add a public comment to this blog, go to the bottom of this page where it says “Leave a Reply”, and enter your comment in that box. I love to get public comments, so don’t be shy!