There’s nothing like oil paint to please the senses.  My senses, at least.  Not that one wants to smear it all over one’s body, although that sometimes happens when one least expects it, but it just looks sensuous.  I concede that a good pastel painting can look as if it had been created by oil paints .  After all, the same pigments form the bases of oils, pastels, and watercolors.  But for sheer yummy lusciousness, however, there’s nothing like oils.   I love the look of wet oil paint in particular.  The glossiness of it.  You never get that with pastels or watercolor.  Or, dare I say, with acrylic?

To keep that glossy look of wet paint, I have been using a medium that includes Liquin.  It works so well that recently when I took a painting in to be scanned for reproductions, there was a concern that the shine would interfere with the scan.  It didn’t, thank goodness.

I bring this up today because the painting I was working on Sunday sings to me like a ripe peach.  I don’t know how else to describe it. 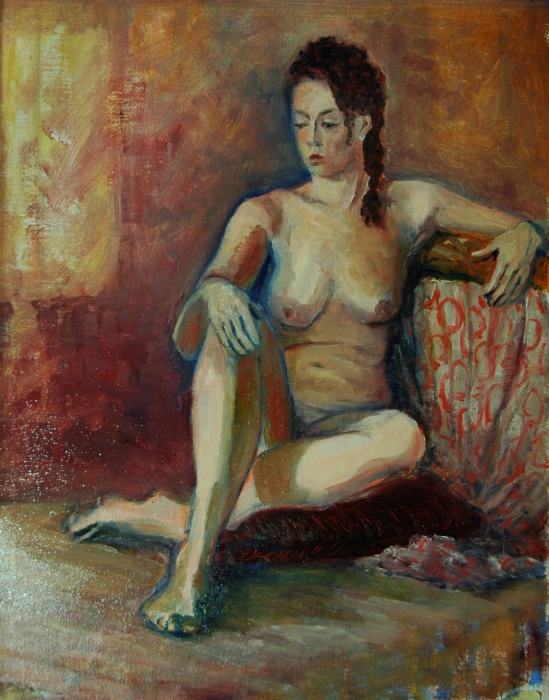 Although it might not come through on the computer screen, every area of this painting is permeated with red.  I was in a red mood, I guess.

I might have been teetering on the edge of another breakthrough (yes, yet another breakthrough):  this one, out of realism and into something different–a realm where seeing is only one of the engaged senses.  Feeling, smelling, hearing, even tasting seem to figure in the experience.   Notice  the words I chose above–singing peaches, luscious paint.  “Peaches” evokes tasting and smelling.  “Singing” evokes hearing and feeling. Touching– through the brush–that IS painting.   I think maybe, just maybe, this ability of a work of art to evoke more than a visual response is what makes art  important to our civilization.

Lest you think I am going all weird and mystical on you, let me reassure you that I have not gone off the deep end or found religion.  But I like my new hypothesis:  only when you are able to let go of the visual rules for creating art (I mean, not break the rules, but LET GO) and allow your  nonvisual senses to manifest themselves in a painting, only then are you making good art.  Let me be clear–it’s not about breaking any rules; you may, or you may not.  However many rules may underpin a great work of art, they don’t control a great work of art.  Think Van Gogh.

Now that I’ve got some rules down pat, I will try to let them slide in favor of putting my other senses in charge.  I will at least be thinking about doing that.

My last two Tuesday paintings are more down to earth:

The title means:  no way am I allowing that drape in a future session!  You’d think that I’d like hot pink, given my fondness for reds.   But  this shade of hot pink was too intimidating, too overpowering.  I couldn’t see color anywhere else.  This painting could have been pretty good if I had only solved the problem of color and background.  The lines of the figure should be the story here, not all that distracting pink and bilious background.  Might be worth fixing.  In my studio where no hot pink is allowed.

I could have called this a “Study in Complementary Colors.”  (blue and orange)  Reading or sharing my distress over the hot pink drape of the week before, Fletch, who most of the time is one of us artists, arrived with his own blue drape.  He’s also good at moving the model stand and getting the overhead fans to work.  Full service model!  For most of the session, his left foot was not visible–it  had sunk deep into the three pillows that he was resting it on.   It didn’t look right, having his leg end at the ankle, so at the end we substituted a trash can for the pillows just so that I could get a view of the leg terminating in a proper foot.  (One of the pillows got obliterated as well–who needs that detail when you have a lovely foot to admire?)

Mark the date:  September 8.  On this day the Town of Londonderry NH is doing a very courageous thing:  it is allowing depictions of the nude figure in its annual Art on the Common show.  The special theme of the show is “Bare Essentials”.  Every nude must be juried into the show in order to screen out anything deemed too . . . pornographic?  I am so hoping that some of my nudes will be acceptable to the censors.  But whatever, even if my nudes don’t make it, this is monumental! — this welcoming of nudes in a venue to be frequented by innocent young children whose eyes have never beheld such a thing before, presumably.  PLEASE support Londonderry’s Art in the Common 2012 with your enthusiastic attendance.
Aline Lotter is currently exhibiting:

at the Hatfield Gallery in Manchester; at the Bartlett Inn in Bartlett; at the Epsom Public Library in Epsom; at the Bedford Public Library, in Bedford; and at her studio by appointment.

5 responses to “Painting Luscious, or Painting with your Tastebuds”