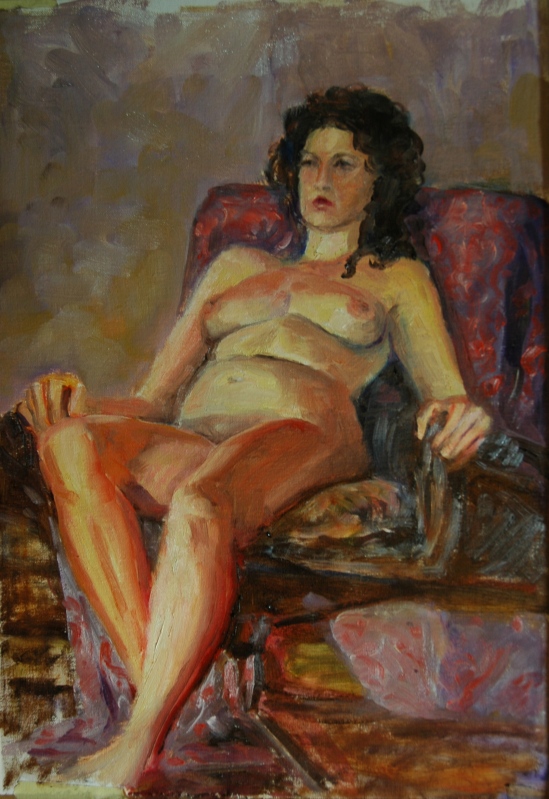 Back in the Brown Recliner (Nude Seated in Recliner)

By now you should be aware, I have been caught up in an activity that could be headlined: Live! Nudes!  Good thing I am a little old lady with white hair, or regular people might suspect something irregular is going on.  This luxury of painting live nudes (as opposed to drawing) has come my way fairly  recently, thanks to the generosity of a fellow artist, Adrienne Silversmith, who lends her studio (nominal fee) for my Tuesday Group, and runs her own group on Sundays.  It was at Adrienne’s Sunday sessions last Spring that I first embarked on painting, rather than drawing, the models.  Why?  Because Adrienne had the model holding the same pose, not just for the 3-hour session, but for multiple successive sessions.  (I didn’t take advantage of the multiple sessions to continue a painting over more than one session–instead I made a series of  four paintings of “The Pose”.)

It was this simple formatting decision that opened the door for my fantastic voyage into live nude painting.  Most life drawing sessions are broken up into segments of quick poses, slightly less quick poses, and longer (1 hour) poses.  The quick poses get you warmed up, and challenge you with positions that a model could not physically hold for longer than 1 or 5 minutes.  Trying to paint short poses can be frustrating, although I did do it once when I had only painting supplies with me.

In the course of these few months of live nude painting, plus the portraits class that I took with Cameron Bennett, I have learned a few things about painting skin tones.  (Caucasian skin tones, that is.  I feel I am still in the experimental stage with darker skins.)

Before I had live nudes to paint, I painted them from drawings that I had made during our Saturday life group.  My very first one, a few years ago, came out all harsh in reds and blues, and I was disappointed in it. It went away to that special place reserved for things to do over, or paint over.  Then, after a long hiatus, I brought it out again, and painted over it with different colors.

From a Charcoal Drawing, a Painting of a Nude Woman

I may have tried a set of pre-mixed colors put together by Howard Sanden.  Sanden is one of the top portraitists of our time, and he had honed his skin-tone expertise to the point where he premixed his skin-tone colors.   Then he decided to sell those premixed colors, and I won a set on eBay.  I found them harder to use than mixing my own colors.  They interrupted my rhythm.  Figuring out how to use them added a layer of complication.  They limited my colors as well.   I wasn’t aware of that shortcoming at the time, but as you can see, I invented skin tones even here that were not to be found in Sanden’s palette.

When I was working from a black and white drawing, I had to invent my colors.  A lot of lavender shows up in my shadows there–probably because, as a plein air landscape painter, lavender shadows were what I was used to.  In a live model, lavender is not much there.  Maybe it depends on the model–most of my best paintings feature Rebecca, and her shadows can be red,  green, gray, red, and ochre, pink; and purple when I wanted it really dark.  For example:

(“In the Artist’s Studio”, my still favorite nude painting, which I keep finding excuses to show.)

So I have stopped worrying about skin tones per se. Instead, I try to evaluate my paintings on the basis of  value, and just enjoy the color.  Here and there I will throw in a few patches of traditional skin color, merely as a reference point for the viewer.  “Here’s what this skin looks like in the light.”

“Back in the Brown Recliner”, shown at the top of the blog, is my latest, from last Tuesday.  We started a about 20 minutes late, so I had to finish up the painting at home, which is kind of interesting in itself.  I seem to be on a clock of three hours, start to finish.  I don’t consciously pace myself to finish within three hours–it just happens.  Except last Tuesday, but that was because we spent a lot of extra time figuring out where and how we wanted our model to pose.

What we ended up with was a pose practically identical the “The Pose”–that Sunday pose held by the same model in the brown recliner for four weeks in succession.  But this time I had a different angle on it.   Here is the No. 4 painting in that original series.

The Pose, No4 (Nude Woman in Brown Recliner

I have 2 photos of this painting, taken a week apart.  Here is the other one.

The colors are so different, it’s disturbing.   I believe the first one is more accurate.  Perhaps it goes to show how it’s not the color of skin, it’s the values and the heat that make or break a nude painting.  Well, any painting, really; it’s just more obvious with nudes.  It also goes to show that you can’t trust a photograph to convey the true beauty of a painting.

By the way, I’m posting larger versions of some of my paintings because I lately realized that you cannot click on an image to enlarge it.  That must have been something I remember from the iWeb days.  I hope you enjoy seeing the brush strokes up close.  I see you lose the title though.  I guess nothing’s perfect.

at the Hatfield Gallery in Manchester; at the Bartlett Inn in Bartlett; at the Red Jacket Inn in North Conway; at the Epsom Public Library in Epsom; at the Bedford Public Library, in Bedford; and at her studio by appointment.