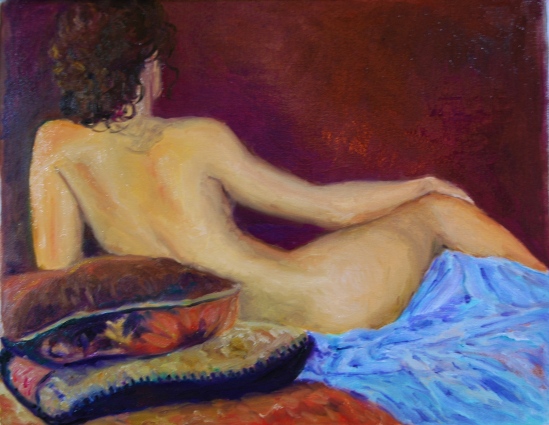 Yesterday’s painting, part still life, part breathing life, represents a bit of a change of pace.  I requested a view of the model’s back because I wanted to concentrate on larger shapes, more subtle changes in value.  I didn’t really intend to get hung up on the decorative pillows and drapes, but I can’t help myself.  To my eye, those pillows now look exactly like the real thing, even though I suggested only their basic characteristics.  It doesn’t take much information from the eye to translate a form into something the brain recognizes.  That ability of the brain to glom onto something and make sense of it is what enables a certain colleague of mine to see elves and monkeys in just about any painting of shrubbery or clouds.  That ability might also be the thing that gets in the way of accuracy when you really need it, as when you are painting a portrait.  “That’s it, you got that!”  the brain exclaims, but it’s just not trustworthy.

The comparison  of my reclining nude to the Ingres “Odalisque” is inevitable–well, I like to think it’s inevitable.  Comparing my work to Ingres’ is a little bit of . . . is “hubris” the correct word?  What the hell, let’s do it anyway:

Much has been made of the anatomical distortions in Ingres’ figure.  Ingres is one of the foremost figure artists of all time, so he didn’t make anatomical mistakes.  He exaggerated, on purpose, the length of her torso and right arm.   And it works, if  you don’t think about it too hard.

My model’s back was almost as smooth as Odalisque’s, but I took pains to include as much nuance as was available.  I’m now thinking some of it is overstated.  I have to keep reminding myself, it doesn’t take much of a change in value or color to get the point across, not with the brain of my viewer zeroing in on the point with great efficiency.

In my Tuesday Life Group, the pose was a carryover from the week before. (One of our artists needed two sessions to work on her painting.)  So I moved to a different part of the room, one I usually avoid.  As a result I suffered from glare from  the sunlit windows  combined with insufficient light on my canvas.  Add to that the fact that my new lens in my right eye does not focus as well as the old one, cloudy though the old one was.  With so many visual handicaps, you’d expect me to strike out on this one altogether.

Apart from one yellow breast and one red one, there’s not much I want to change.  Is good vision overrated?  No.  I worked hard to compensate for the poor conditions:  I wore a hat with a brim that I could pull down to shield my eyes from the glare from the windows, and I would bring the painting in close to my eye when I needed to be able to see what I was doing (putting the lights in her eyes, for example. or the highlights on the earrings).  [Footnote: My left is the distance eye, which I use to see the model, whereas the right eye, is the near eye, which I use to see what I am painting.  It was the right eye that got a new lens.]

Seeing what you are doing in fine detail is not important most of the time, unless you are a classical artist.  (Like Ingres).  By the way, this is a pretty good likeness, my untrustworthy brain thinks.  And how about those earrings!  I so loved painting the earrings, which required a bit of skill, and the headband, which required no skill at all.   I love being able to put a stroke of paint on a spot and having it pop right in place and speak its nature.  Obedient.

I want to record herewith an “improvement” made to another painting.  I was bothered by the highlights on her eyelids, and when a friend confessed that the highlights bothered her too, I fixed them.  Here is the before and after. 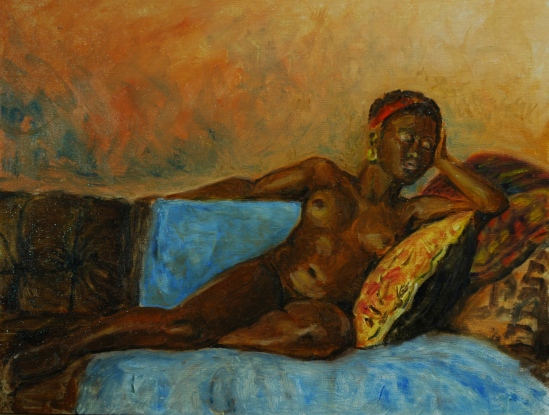 On the brown leather sofa (BEFORE)

Less is more when it comes to values.  I tend to overdo the highlights, because that’s what I see–the highlight on dark skin is almost blindingly white, like light bouncing off a glass.  In a painting, however, such bright highlights look strange.  Or, perhaps, this exemplifies another deception, eye-brain-wise:  those highlights were never as bright as I think I see them, they just looked bright by contrast with the surrounding color.  And it illustrates another truth–sometimes you need to separate the painting from the live subject of a painting in order to see and correct the values.

So to sum up this week’s theme:  Beware of  deceiving yourself, but take advantage of your viewers’ willingness to see what you want them to see.