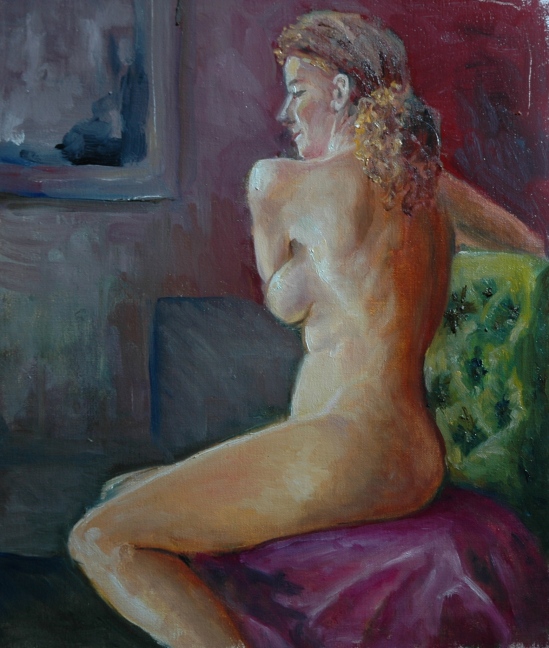 Margaret in a Twist

June is the month of Margaret, but since we are not meeting on Fridays, we’ll have only the four Tuesday sessions to try to capture her elusive likeness.  (Prior agonies were explored in this blog.) This profile isn’t too bad, but what I was concentrating on was the body–the subtle swellings and shadows that reveal bones and muscle and fat.  Not much fat on Margaret, but that just makes what is there all the more fascinating.  As usual, I enjoyed playing with the colors, exaggerating the warmth that I was seeing in the shadow side.  I see a few things (e.g., the way the chair back comes forward) that I would fix if I thought I’d be showing this anyone, but that’s unlikely to happen.  (I mean in person, not online.)

Saturday, a welcome change of pace:  I took the opportunity to join the NH Plein Air artists in the second annual paint out at the Forbes House Museum in Milton, Massachusetts.  Last year we had lots of sales (commission to benefit the Forbes  House), so we had some hopes for a repeat.  But this year, no bustling crowds.  My theory–everyone had graduations to attend.  Never mind–the weather was outstanding and we were doing what we love to do.  For painting subjects, with the Museum’s encouragement, we left the grounds of the Museum to seek out local water scenes.  My driving companion, Flo Parlangeli, has a connection to water that sets her heart to pounding.  I’m  sorry I didn’t think to take a photo of her painting and her two paintings.  She was painting them both at the same time–one on her easel and one in her lap.  Pretty peculiar, but it was all because she was working in acrylic paint, which dries fast.  The fast drying quality was something Flo was using to her advantage.  She’d let one dry and work on the other, then pick up the first and paint over the previous layer, then repeat with the second one.

This was my first one, which I spent about three hours on.  I placed it in an Art Cocoon and to make sure it didn’t flop out, I taped the corners.  But I was careless, and turned it upside down, and the panel did flop out of its bed.  As a result, I lost some of my crisp dark edges at the bottoms of the boats.  I had thick, white paint in those areas that just flattened and spread out over the edges.  I like to paint thick, wet into wet, although there is a limit to how much paint you can pile without losing control of the situation.  I was too close to losing control here even before the accident with the Cocoon.  This also illustrates why Flo was using the fast-drying acrylics.

So Flo was not going anywhere and I was finished with the boats.  I could have taken her car and driven to  another location.  Instead, I set up in a new spot nearby, in the lee of the boat ramp, where I was visited by a family of ducks.   Such as the joys of plein air painting, offsetting the distress caused by wind gusts that try to make off with  umbrella and anything attached to it (like your easel).

I thank you all for your feedback on last week’s project, the lettering for my Live Free poster.  I am still mulling over all the suggestions.   In the meantime, I have covered up “. . . and”.  Some objected to the ellipsis, but it was part of the original challenge–just in reverse order.  I decided to conform to the challenge more literally–when the paint dries, I will paint in letters for “and . . .”  When I complete the project, I will post the final version.  And if I have nothing more interesting to talk about, I will describe all the suggestions I received and reasons why I did or did not take them.

at the Hatfield Gallery and the East Colony Fine Art Gallery in Manchester (Langer Place, 55 S. Commercial St., Manchester, NH); at the Bartlett Inn in Bartlett; at the Red Jacket Inn in North Conway;  at Stella Blu , an American Tapas restaurant in Nashua; at the law offices of Mesmer and Deleault at 41 Brook St in Manchester; at the Norris Cotton Cancer Center in Manchester (part of the Healing with Art program) and at her studio by appointment.  Two paintings are also hung somewhere in an office of Congresswoman Carol Shea Porter, probably the Manchester one.  Currently, the only location for viewing the nudes is at her studio.

4 responses to “She’s Back (More Margaret)”