As a result of my previous blog featuring myself as a model, which everyone seemed to enjoy more than my paintings of other people, I have resolved to try to show more artwork that is not my own, and to do a fresh self-portrait, if only to assure myself that my skills have improved in the last three years.  So this week, I present such a self-portrait, and even more exciting . . . well, truly exciting . . . a video of another artist’s painting of our Monday morning model.  You will see what I painted that day plus what is in effect a demo of what Tony Luongo did that same day.

Starting with the self-portrait, I have to say I am a little surprised that it looks so similar to my 2011 pencil portrait.  That is to say, I haven’t aged a bit in three years. 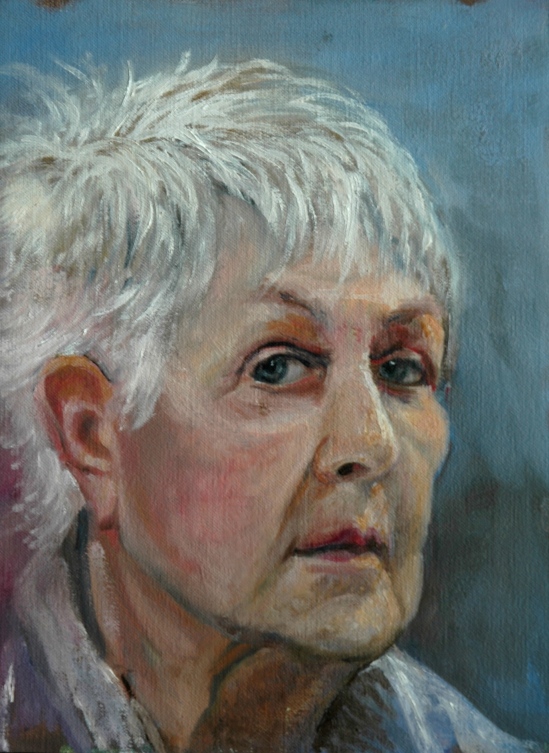 I hope you agree I did a better job on the nose this time.  Comparing a pencil portrait to an oil painted portrait may be unfair to the pencil, so for purposes of evaluating my skills, I will show you another selfie painted in an early portrait class (2008) that I took with Adeline Goldminc-Tronzo.  Bear in mind that the earlier portrait was developed over several sessions and helped by the observations of the teacher.  It was the best thing I did in that class. 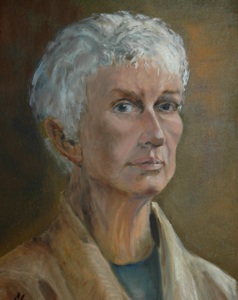 Same hair, same eyes, but younger lips and less saggy around the jaw.  Oops, there I go again, concentrating on the wrong thing!  Six years of practice have gone into a more courageous handling of the paint and a more accurate portrait (I think).  And I did the new one in only a few hours.  Credit is owed, however, to my colleague Dee Lessard, with whom I was painting that day, for her observations.

For our Monday painting last week, Aubrey was our model again.  This is what I produced: 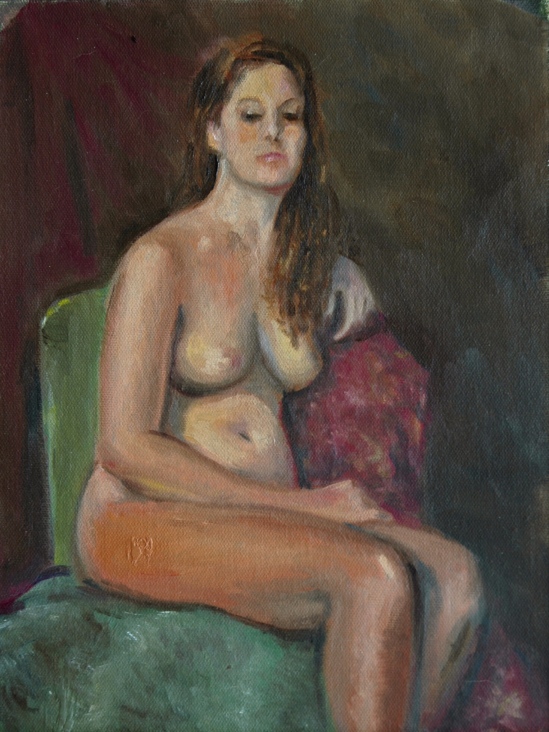 Tony set up his easel on Aubrey’s other side.  I worried that he was not getting a good angle or enough light, but as you will see, he didn’t seem much bothered by such details.  I never noticed that he had set up his smart phone on some kind of rack and set it to record his every move.  After he got home, he sped up the action so that the final video takes only ten minutes or so. http://www.youtube.com/user/luongoart

In an interesting coincidence, it turns out that Tony also modeled for Cameron Bennett’s master’s thesis painting.  Tony shared with me a photo of that painting in progress, and I wish I could share it with you, but since it was a work in progress at that time, I would need the artist’s permission first.  The painting was a crowd scene, with me and other volunteers playing our roles as members of an audience to two mysterious floating figures furnished by paid models.  Either the models or Cameron are magicians.

at the Hatfield Gallery and the East Colony Fine Art Gallery in Manchester (both are in Langer Place, 55 S. Commercial St., Manchester, NH); at the Bartlett Inn in Bartlett;  at the New London Inn in New London; at the law offices of Mesmer and Deleault at 41 Brook St in Manchester; at the Norris Cotton Cancer Center in Manchester (but access is limited to patients and health care workers). And for the month of December, at the Currier Museum of Art, Manchester NH.

You may also view paintings with prices and order prints, iPhone cases and the like at my Fine Art America page. If the painting you are interested in is not there, or if you prefer to bypass that experience, you may contact me by email to alotter@mac.com.