Since my last post, I feel as though I have been feverishly busy, but most of the painting time has been studio time.  Not  many of my plein air landscapes have come inside without need for improvements.  I am enjoying the process of making improvements–well, I hope what I’m doing improves the paintings,–but worry about why the need.  Am I getting pickier?  Am I getting slower?  What’s up with all this tinkering, etc.?

I hope I’m getting smarter, that I see more ways to improve when I get the painting home and can assess its defects dispassionately, without being influenced by reality.  I suspect I am also getting a lot slower in painting, as in everything else I do.  I can’t even get dressed in the morning without straying off the rails into some distracting musing.  Maybe that’s late onset of attention deficit disorder, but when I am painting, I am able to keep my focus on the painting and the scene.

So, last weekend–oops, two weekends ago!–I participated in the annual Portsmouth paintout put on by the NH Art Association, which is a Portsmouth outfit.  I believe that makes the fourth year of my participation and I haven’t missed a year yet.  I couldn’t complete the event on Sunday because of my commitment to Sundays in the Gloucester garden of David Curtis, but I managed to produce three 12×16 paintings, which is pretty large for plein air.

The first painting took me from about ten in the morning until about two in the afternoon.  The heat was enervating.  I had a good concept for my painting:  under the drawbridge with the drawbridge raised to allow a tugboat to pass through.  My brain wasn’t working in top gear, however, so it took me a while to realize that if I took a photo of the raised drawbridge, I wouldn’t have to wait for it to be raised to see how that changed the elements.  The product as “finished” in those four hours (a pretty long time for me to need for a plein air painting) had good bones, but it was rough–very rough.  The sky paint did not even cover the gray ground.

The second painting was from the same vantage point but a different perspective–closer to being under that drawbridge, which is called Memorial Bridge, with a view of the other two bridges from Portsmouth to Maine:  another drawbridge and the elevated highway bridge even farther back.   Someone called me on the phone about one o’clock and commented that I did not sound well.  Interesting.  Did I mention it was very hot that day?  I told her I was fine.  As fine as someone who has become dehydrated without being aware of that fact.  It was a hint, and eventually I took it– I got the elements of those three bridges down in an hour and then quit.  As you would expect, with all those excuses, I had to do a lot of improving when I got the two back in my hands.  Here are the finished versions:

For my third Portsmouth painting, conditions were better.  I didn’t even try to get started before noon.  I spent only two hours.  I was in the shade.  There was a breeze.  For those reasons, perhaps, I have not felt the need to tinker with the painting produced at the Elks Club of Portsmouth: 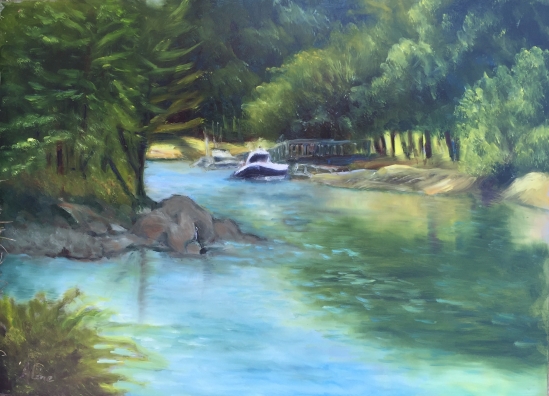 At the Elks Club in Portsmouth

Just a few days ago, I went back to Cape Cod to pick up the painting that had been shown at the Addison Gallery’s show “Found my Park”, and to paint something new somewhere on the Cape.  The old painting looked better than I remembered it, so there’s another example of getting ‘er done outside, but it was 11×14, much smaller than the Portsmouth ones.  Here is what I’m talking about: 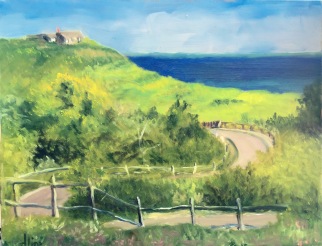 To find another good spot for painting, we watched for likely signs–to beaches or parks.  We chose to explore Nickerson State Park in Brewster.  An amazing and huge tract of wildness.  No ocean, no dunes anywhere, but glimpses of water.  I finally went online with my iPhone and found a map that got us to Cliff Pond and Fisherman’s Landing.  There was nobody there when I set up my easel, but soon we were inundated with children and dogs.  I had a dog with me myself.  It wasn’t a problem, but I did not feel inspired.  After I got home and had a chance to sleep on it, I knew what I had to do.  I had to add stronger dapples of shade and sunlight throughout, including on the figures of my companions.

I have to confess that my dappling in this painting may have been influenced by my recent trip to the Peabody Essex Museum’s exhibit of Childe Hassam’s Isle of Shoals paintings.

I want to thank all of my followers who took me up on the offer of free paintings.  I am grateful because can you imagine the humiliation if I couldn’t even give away my paintings?  Ouch!  But it’s just a drop in the bucket, so if you have been hesitating because of some reluctance to take advantage, the offer is still good.  I am limiting to paintings 11×14 or smaller, simply for ease in mailing.  The priority mailing cost is $12.00.  Stake your claim!

At the Bartlett Inn in Bartlett;  at the Bernerhof Inn in Glen; at the Red Jacket Inn in North Conway;  at the New Hampshire Antique Co-op in Milford;  and at the law offices of Mesmer and Deleault at 41 Brook St in Manchester.