In 2004, before I even started painting, I read an article in a cat magazine, while I was waiting in the veterinarian’s office, about what a great cat this newly recognized breed, the Pixie Cat, was.  Smart, friendly and almost dog-like in the way they connect to people, Pixie Bobs look like a small version of a wild bobcat:  short tails, spotted markings, tufted ears.  I was intrigued, and set about looking for a breeder in New Hampshire.  I found just one, and as luck would have it, she had a kitten with a “bad” tail that was in need of a good home.  The tail was bad because it was too long and ended in a crook.  I reimbursed her for her veterinarian fees and took title to the little fellow.  He was about 10 weeks old.  He had been named “Winchester” but we were not about to call him that.  My granddaughter decided his name should be “Freckles”, for the little spots on his muzzle.

He came to me already microchipped.  We had at least two cats already, and there was a cat door available for free travel in and out.  The other cats weren’t much into going outside.  Freckles, however, was an adventurer.  Once, a neighbor, who happened to be a firefighter, had to climb up a tall pine tree to retrieve him.  Another time, he went missing for a whole week, so I posted laminated posters all over the neighborhood with his picture and a description of the crooked tail.  Almost immediately, I got a call from an ex-neighbor who had just come to check out the vacant property she had for sale–he was stuck on her roof! She was ready to take him to her new home when she noticed the poster.

Frequently he could be found chilling’ on the rocker on the porch of a house up the block; they wanted to claim him as theirs too, but fortunately he had already acquired a rep and most neighbors knew where he belonged, even if they didn’t know me.  He enjoyed car rides and would hop right into one without invitation.  But I figured he was safe, because of  his microchip.  Sadly, I now know that for a microchip to work, it has to be looked for.

Freckles was one of my very first attempts at a cat portrait, and that painting is still one of my most successful, if you measure success by how quickly viewers fell in love with the subject.  I had used that portrait as him Missing Cat poster photo.

Then in December of 2010, when Freckles was six years old, he got caught outside in a snowstorm.  I never saw him again–until last week.  All these years, I had hoped that he simply accepted a car ride with someone who decided not to check him for a microchip.  (Vets do not routinely scan new patients for microchips.  Asked why not, one vet answered that it would appear distrustful of the pet’s guardian.)  But I realized he more likely was dead.  I would look up at that portrait of him and feel my loss every time.  He was my most special cat, the only one I ever sought out to buy from a breeder.

Monday morning I got the news that someone had scanned a stray cat in Nashua (about 20 miles South) and come up with Freckles’ contact information.  None of my phone numbers was still good, but the fax number went to the firm I practiced law with–the firm that had often been visited by Freckles because I liked to take him everywhere with me.  By one p.m. the responsible cat owner who searched for his true owner, she’s my hero, Belinda, met me in a parking lot and turned over to me a somewhat confused Freckles.  He seemed content being with her and not very interested in coming home with me.  But being Freckles, he accepted it.  He did, after all, enjoy car rides.  Here is a photo that Belinda shared with me, of Freckles napping in her daughter’s bed. 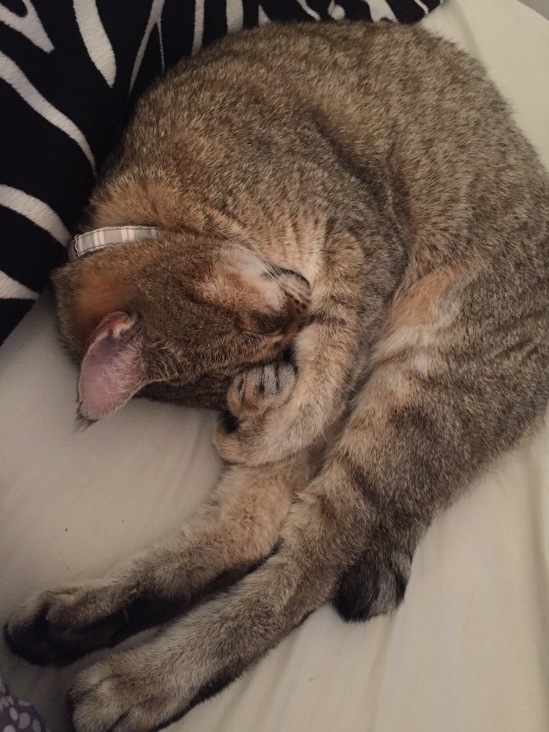 I had to quarantine him away from my other cats until we were sure he wasn’t carrying any contagious disease or parasites, but the vet declared him amazingly healthy for a senior cat on his own.  Actually, amazingly healthy for a cat of any age.  Even his teeth were good.  The cat door has not been openable from the outside ever since he disappeared six years ago, but he is getting enough stimulation from the four younger cats occupying my house.  He does seem to remember the house, not to mention the cat door, and he is warming up to me.  He seems to want to be in the same room with me.  The other four cats are showing him great respect, as is his due.  He has only to look at them, not even a stare, just a look, to claim his lofty position as No. 1.  His favorite perch, when we (my follower cat Milo and I) are in the TV room/art gallery is the top of a leather chair like the one that I sit in, so that we are on the same level. 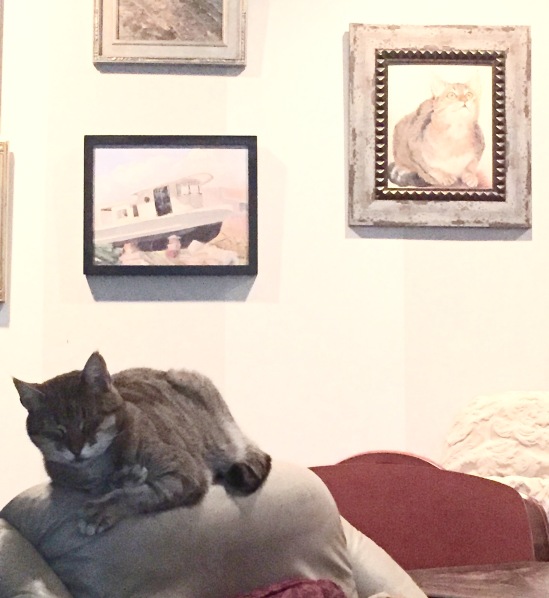 Note the painting hanging in the background.

Two more photos:  one to compare to his kitten photo and the other to mark his privileged occupation of my otherwise cat-free computer sanctuary.  He has found the printer-scanner-copier combo to be a good place to hang out. 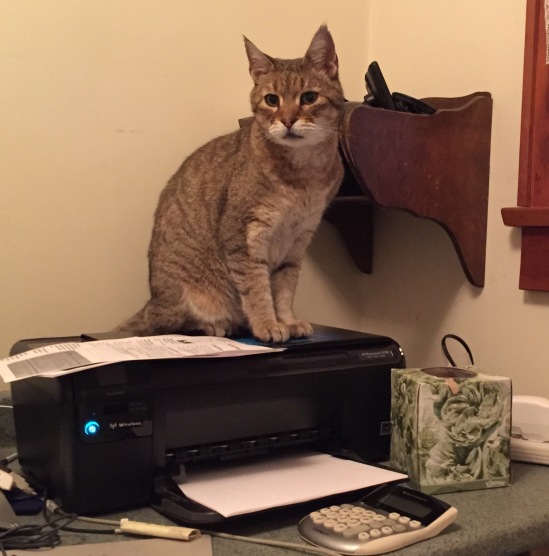 I’m not sure what all this has to do with my painting.  It’s just a tale I needed to tell.  A love note for my special cat.

At the Bartlett Inn in Bartlett;  at the Bernerhof Inn in Glen; at the Red Jacket Inn in North Conway;  at the New Hampshire Antique Co-op in Milford;  and at the law offices of Mesmer and Deleault at 41 Brook St in Manchester.