You could rightfully assume that when I turn up on the web after a longer-than-two-week hiatus, I’ll be accompanied by a raft of new paintings.  Sorry to disappoint.  Although many hours in the past 17 days have been spent on various kinds of art-related activities, painting actual pictures was only a smallish part of it.  One workshop with the accomplished portraitist Mary Minifie produced a single portrait (representing three days of labor), while another three-day one with Paul Ingbretson on composition produced nothing but horrible practice scribbles.  Even worse, last Monday’s session with our lovely preggie model was lackluster, the result not as appealing to me as my first painting of her.

One saving grace: as a small favor to me, my friend Arthur offered to sit for me to do his portrait, and I managed to turn that into a big favor.  Immediately upon viewing the painting after the first sitting, his mom declared herself a buyer.  And after the second sitting, my model asked me to do another one for him.  Although I wasn’t timing either session, I think the first sitting lasted about an hour and a half, and the second about an hour.  Hence:  24 hours on a Margaret produced with Minifie versus 2.5 hours spent on Arthur winging it on my own.  Both paintings are 11×14, so there was no size differential.  No surprise–Arthur’s portrait looks rough while Margaret’s looks delicate. 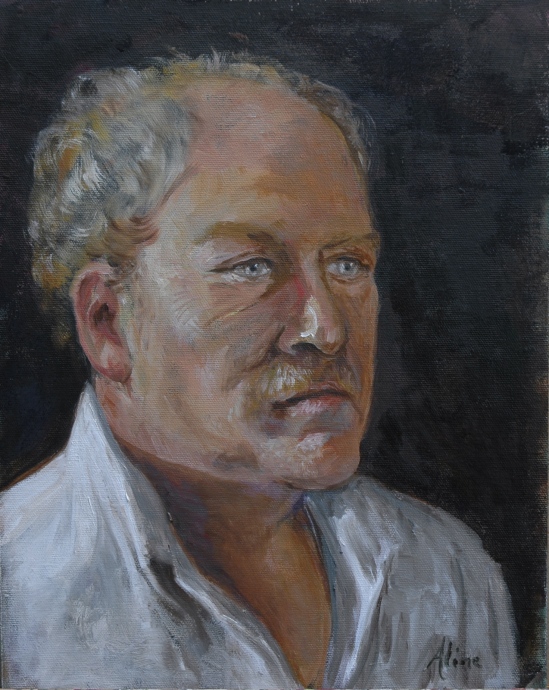 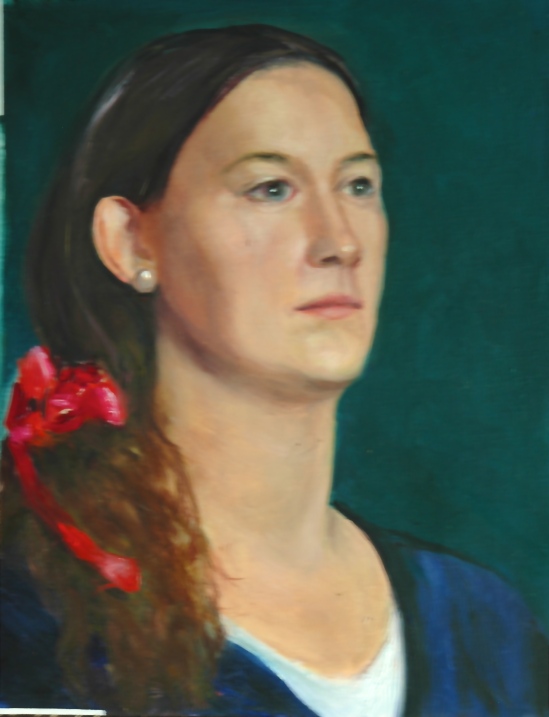 Mary Minifie started with the selection of clothing and background.  The goal was to enhance the beauty of our model’s skin tone, and also to create a pleasing composition, in which color plays a major part (a point that got made again in the second workshop).  That took one hour.  I thought then that it was an outlandish amount of time to spend on the selection of drapes to form a background, but looking back, I appreciate its importance.  My photograph of the painting, even when adjusted, may not convey the right color impressions over the internet, especially when the actual hue, value and intensity had been so carefully calibrated.  When you look at the completed painting, can you appreciate the rightness of the color of the background?  What about the color of her shirt?  What about that bit of white in her bodice?  The shirt, by the way, was painted with a lapis lazuli from Michael Harding that I found in a batch acquired through eBay.  So beautiful–the blue used by Vermeer, before ultramarine was invented.

The next big chunk of time was spent on Mary’s demo of, and our attempt to duplicate, the egg approach to portrait painting.  We first tried it on a small 5×7 panel, then on our big panel.  The basic idea:  paint an oval in the shape of the model’s head matching the tint of each area of the head and neck, gradually increasing the detail as we decreased the patch of skin being matched in paint.  In theory, the features start to emerge.  Attention is also given to her pearl earring, her red hair ornament, and her hair itself.  Margaret was much better at holding her pose than Arthur, of course.  In theory, the better painting should result from this approach.

However, I am happier with my portrait of Arthur.  It reminds me of a tour de force by Rose Frantzen titled “Portrait of Maquoketa”.  Maquoketa is the name of her home town in Iowa, to which she had returned after a period of trying to “make it” in the Big Apple.  She set out to paint all of the Maquoketa residents who were willing to sit.  You really should visit this page where the story and all of the portraits are kept.  In the meantime, enjoy this cover of her book, which contains all 180 of the portraits and a clever flip-book effect in the corners, whereby you can watch a painting in progress.

Frantzen’s method is called “alla prima” because the paintings are completed in one sitting without any kind of underpainting or academic preparation.  Alla prima (or almost alla prima in “Arthur”‘s case) suits me better than the classical approach mastered so well by Mary Minifie.  Alla prima is something I can do now, whereas the more academic method would take me years to master, and I don’t have that kind of time left to me, unfortunately.  Although I expect to live to be 100, I’m not sure I will be able to paint until 100.

at the Hatfield Gallery and the East Colony Fine Art Gallery in Manchester (both are in Langer Place, 55 S. Commercial St., Manchester, NH); at the Bartlett Inn in Bartlett and the Bernerhof Inn in Glen; at the Red Jacket Inn in North Conway; at the law offices of Mesmer and Deleault at 41 Brook St in Manchester; at the Manchester office of Congresswoman Carol Shea Porter; two paintings are hanging at the Bedford Library as part of the Womens Caucus For Art exhibit “Summer Bounty”;  a single painting is on view at the Radisson Hotel in Manchester for the summer; and at her studio by appointment (email: alotter@mac.com). You may also view paintings with prices and order prints at my Fine Art America page. If the painting you are interested in is not there, or if you prefer to bypass that experience, you may contact me using the private feedback form below. If you want to add a public comment to this blog, go to the bottom of this page where it says “Leave a Reply”, and enter your comment in that box. I love to get public comments, so don’t be shy!