IPAP stands for International Plein Air Painters, and every year in September, IPAP, the organization, calls on the painters to get outside on a particular weekend and paint. Our local organization, the NH Plein Air group, or guys, or whatever, responded to the call. It is our tradition to select three different locations over the weekend (weekend for painters generally includes Friday). So while in other parts of the world, I imagine painters piling up at their glamorous locations, we spread it around New Hampshire.

I participated on the first two days of our event. Friday we painted at Twin Bridge Park in Merrimack. It’s one of those places that you would never notice unless you got out of the car and explored. From the parking lot, you take a trail down toward a baseball field and playground, but then veer off into the woods, and descend farther, following the sound of rushing water, to a trail alongside Baboosic Brook. Due to the recent storms, the Brook was a torrent.

My chosen scene, featuring Sharon Allen behind the tree. 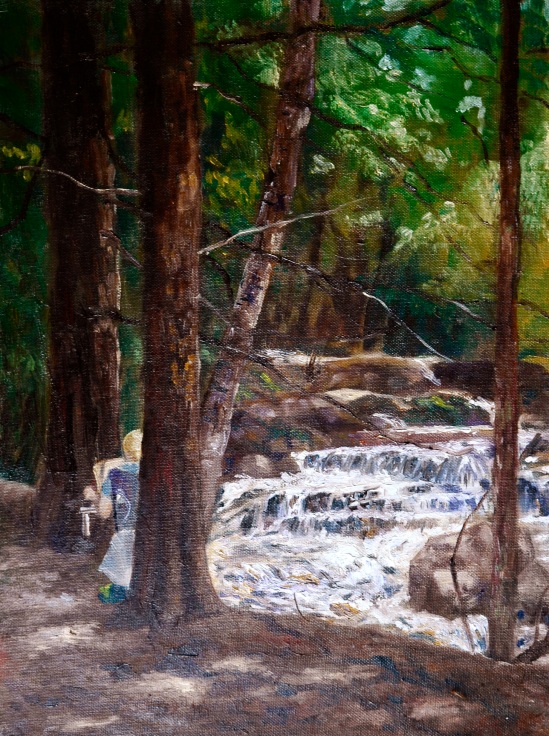 Because of last week’s workshop on layering water, for my second painting I chose this scene:

The water was moving very slowly over the flat rock in the foreground, which just happened to be catching beams of sunlight. The light enables you to see the shapes and shadows formed by the rock’s submerged surface, the ripples catch the blue of the sky, there’s foam, there’s vegetation, there’s unsubmerged rock. There’s not enough time! I had only an hour to work on this painting, so I kept my rendition of this scene abstract:

I like this painting for what it is, but I would like to paint another version from my photograph, to see if I can better capture the effect of the light and seeing-throughness, to coin a phrase. (Probably “transparency” is the synonym, but that word has secondary meanings and who needs that?)

Saturday morning I could not give up the new year’s first meeting of the Saturday Life Group, so I was not at the appointed IPAP location until the afternoon. We painted in the most northerly end of the Amoskeag Millyards in Manchester. Old mills, because of their locations on waterways, near falls, offer a large range of subject matter. It was my idea to paint there, but turnout was disappointing. I guess most plein air painters prefer natural landscapes over the man-made ones. I, on the other hand, even welcome the odd vehicle into my paintings from time to time:

The building in the foreground is occupied by a restaurant (Fratello’s–good Italian fare). All of the buildings in the Millyard have been repurposed of course–there is no milling going on there. In another one of them, at the southern end of the city, is the artist’s studio where we have our figure drawing on Tuesdays.

NEWS FLASH! A new fine art gallery is opening in the arts and cultural neighborhood of Manchester, 70 Lowell Street, just down Lowell Street from the new building of the NH Institute of Art. Called the “Sage Gallery . . . . a Fine Art and Metaphysical Meeting Place” (how quixotic is that!), it is owned and operated by the former director of the Manchester Artists Association Gallery, Janice Donnelly. I have seen the space and it is terrific, and of course the location is also terrific, not to mention the director–yes, also terrific. Yes, I will be exhibiting there. I think the hours are generally 11 to 4. If you can, please stop by and encourage Janice’s courageous venture.