I’ve been “absent” for a few weeks, in part because of Stapleton Kearns’ “Snow Camp 2015”, which took place at the Bartlett Inn in Bartlett, NH.  Stapleton started with Snow Camp in 2010 and repeated it annually thereafter at the Sunset Hill Inn in Sugar Hill, NH.  But last year, Sunset Hill Inn closed its doors.   Stape booked the workshop at the Bartlett Inn, which a few of us had been urging upon him from the beginning as it is home base for the Great semi-annual Artists Getaway Weekend.  When I learned of the relocation, I jumped to sign up for it despite my 2012 decision not to spend any more workshop dollars on landscape painting.  Besides, “Have boots, will paint [outdoors in the winter].”  Meaning:  I spent the big bucks back in 2010 for my duck hunting boots and the only time I use them is when I am painting outdoors in the winter–a pretty rare occasion.  I was a little concerned by the fact that I am now five years older than I was when I first braved the conditions of frigid temps and difficult terrain underfoot.  Regardless of any other measure of the workshop, mere survival was this year going to equal success.

I did survive–maybe!  Four of our company had been nursing various cold-like symptoms, and Wednesday night after being back home, my own version of the ailment announced its arrival with a sore throat.  I have taken the previous three days off to rest and recuperate, getting nothing done.  Still no recuperation in sight, alas!   I still have a wretched sore throat, along with other miseries.  My resilience was probably compromised by those five years of aging, not to mention the daunting weather conditions we braved over the weekend:  temps in the minus column before calculating the wind chill; fierce wind gusts; and on the last day (Monday),  a new layer of snow falling gently.  I was very happy to stay over at the Inn an extra night.

Miriam and Nick (the Innkeepers) kept the kettle on all day for tea and cocoa and if the timing was right, an artist could go inside to find warm brownies or ginger cakes awaiting.  We stayed on the grounds of the Inn to paint, same as we had done in Sugar Hill.  Sunset Hill Inn had a spectacular view of Cannon Mountain and Franconia Notch, but at the Bartlett Inn we enjoyed a different kind of subject matter:  trees, buildings, roads, all covered in snow.  No vistas.  That suited me fine.

Snow as a painting subject is surprisingly complicated.  In earlier days, before I knew any better, I’d painted a lot of snow scenes from photographs, which doesn’t even get near the problem. My blog of 2010 and 2011 talked about some of the issues, but when I migrated that blog to this site, I never reposted the photographs of those paintings.  I am remedying that oversight now, but I’ll post those earlier paintings here too.  In chronological order: 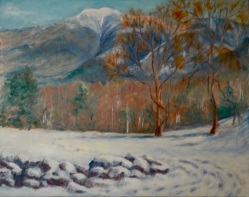 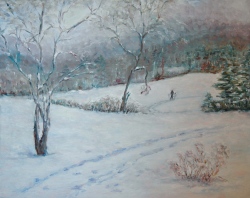 Stape always does a demonstration painting in the morning.  It’s harder to deal with the cold when you are not absorbed in your own painting, but at least you can keep your hands warm.  I spent both afternoons of the first two days working on one scene.  The first afternoon was largely wasted:  I had “toned” my panel to cover up an old painting underneath, and the paint I had used refused to dry.  As a result the toning color (tan) was muddying up the new composition.  And it was so cold that I couldn’t even squeeze my white paint onto my palette.  Stape had to do that for me.  And the paint was so stiff that I couldn’t mix it or spread it.  Stape told me to wipe it down to get rid of the bad underpaint, then use a lot of Liquin to soften up and dry the new paint.  The next morning, I went straight to work, forgoing the demo.  Because of the conditions, I quit pretty early, about 2:30 in the afternoon that Sunday.  Today I cleaned up the faults still remaining in the painting, and this is the result:

Last Scrap of Light at the Bartlett Inn

Whereas the 2011 workshop had been about getting all the primary hues into the snow, this year the problem was getting the values right.  I had to make sure that no spot in the snow bank was as light as the lit edges, and I darkened all the shadows in the foreground so as to heighten the drama.  The scene is of the cottages next to the Inn itself.

The next day, it was snowing all day.  I watched Stape’s demo in the morning and started a smallish (12×16) painting in the afternoon.  Most of us felt limited to whatever we could grab as subject matter from the shelter of the porch; I was right on the edge of the cover.  Light, flaky snow accumulated on my palette during the course of the afternoon.  I didn’t worry about it though, because Michel (hearty and hardy Nova Scotian) set up down at the road with only an umbrella to shelter himself.  Here’s my view from the porch of the Inn:

Driveway into the Bartlett Inn

In addition to Michel and the usual assortment of NH and Mass. artists, we had artists from Houston, Texas; Baltimore, Maryland; and “an imposter” from Huntington, West Virginia.  “Imposter” because he was not a painter at all, but an author, engaged in research for his new novel featuring an artist.  You can buy his first novel, about a musician, from Amazon:  Song for Chance by John Van Kirk.  I downloaded it to my iPad but haven’t been up to reading it yet. 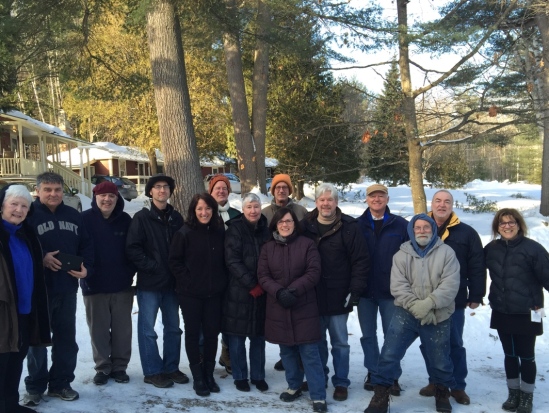 In the background you can see the cottages that I featured in my first painting.  The tall guy in the orange hat is Stapleton Kearns.  It’s the same hat he was wearing in 2010.  The guy in the red hat is James, who has not missed a year of Snow Camp since it started.  The guy in the light gray parka is Byron Carr, who initiated the Artists’ Getaways as the Bartlett Inn–back in 2005, I think.  From left to right:  me; Michel; Jack; Jason; Gina Anderson (fellow artist at East Colony); James; Suzanne; Stape (in back) and Holly (in front); Gary; Dave Drinon (buddy from many classes at NHIA); Byron; John the Imposter, and Debbie (the organizer par excellence!).  Wonderful collection of people!

at the East Colony Fine Art Gallery in Manchester (Langer Place, 55 S. Commercial St., Manchester, NH); at the Bartlett Inn in Bartlett;  at the Bernerhof Inn in Glen; at the law offices of Mesmer and Deleault at 41 Brook St in Manchester; at the McGowan Gallery in Concord, NH.