The clouds have lifted, the sun is shining, and I find myself back in the groove of painting. It’s a good feeling.  I’ve ordered in a huge supply of panels.  If I fill them all with paintings, my problem of finding homes for them is going to be exacerbated.  This problem is similar to the problem of cat and dog overpopulation.  On the one hand, puppies and kittens are so lovable.  On the other hand, dogs and cats take up space and require some minimal maintenance.  Curbing the reproduction of the animals via spay-neuter programs is the solution to that problem.  Will I have to curb my production of artworks?

I am painting for the joy of it, not expecting to make a living at it.  Once the painting is finished, my happiness does not depend on keeping it nearby.  In fact, I’m happiest when I find a loving forever home for my artworks.  If  you would like to give a home to one of my puppies, let me know.  I ask only that you pay for the shipping.  Of course, exceptions will have to be made for certain special projects, ones that I want to give to family members or submit to an exhibit or prize competition.

My latest crop (litter?) includes a bunch of plein air paintings and the still unfinished Manhattan Project, which I had hinted at in the last blog.  (Surely that term is not copyrighted after all these years.)  I’ll delay discussion of the Manhattan Project until it has been completed.  I just hope the final result justifies the suspense that I am building.  Suspense is building, right?

Continuing the practicing for a weekend paint out in Portsmouth, I painted this street scene, which truly was empty of people and cars most of the time:

I added the telephone wires after the painting had dried.  I discovered that if the brush left a glob of excess paint, I could pick it up with the brush and my medium (Gamsol), thereby thinning the line and keeping it wispy.  I won’t be able to do that during the paintout since the underlying paint will not be dry enough, so I’d better pick a different scene for the paintout.   This fact is disappointing because my other choice involves lots of little lines–bridges.  Maybe I can come up with another fine-line technique because once I get a subject into my head (inspiration strikes), nothing else will be good.

Last week, Sharon Allen, Betty Brown and I responded to a call for artists to paint the Cape Cod National Seashore in celebration of the 100-year anniversary of the National Park System.  We found a charming B and B in Eastham to put us up two nights.  Of our three days on the Cape, only two halves were dedicated to serious painting.  The rest of the time we were reconnoitering.  And eating.  Good place to visit if you like seafood.  Duh!  Just before we headed up North homeward bound, we stopped to paint at a town landing which didn’t qualify for the national park paintout.  So I have a total of three paintings to show for the trip.  My “best” one got left there at the Addison Gallery for the big reception.  It was also the first one I painted: 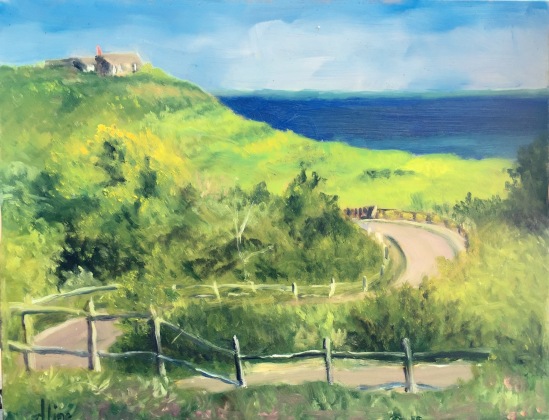 My eye had been drawn to the drama of the light green sea grass (that’s what I am called the grass that grows in the dunes down there, and around the salt water pools) against the deep blue sea.  Add the interesting group of buildings perched (precariously, I am told) atop a high dune, and you’ve got solid inspiration.  I set up in a traffic island in front of the Coast Guard Station.  To my right and way down a hill (guess that’s obvious) there’s a beach full of people and umbrellas.  That was a second choice for a subject, despite the view  being severely limited.  Sharon nevertheless took it on.  Betty, meanwhile, climbed the fire escape and perched herself with her easel up there to create a semi-abstract rendering of marshes and pools.

My second serious painting portrays another Coast Guard Station, this one at Race Point.  The perspective bothered me so I tried to correct for it, but I’m still dubious.  I had intended the front of the building and all lines parallel to it to be level with the horizon, which is what appeared to be the case. But now I think I should have superimposed an imaginary vanishing point off to the left–that is what my eye was reaching for, demanding, despite the evidence of my level. 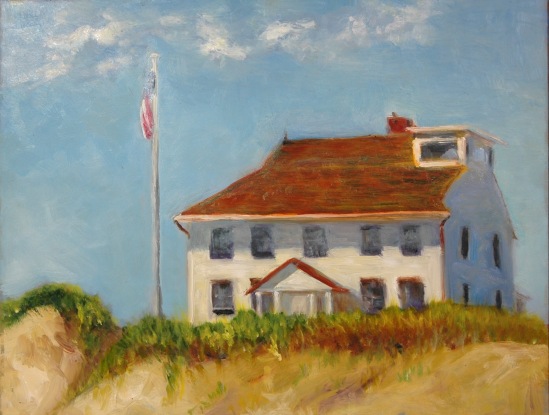 Here is a reference photo that I took of the same building, showing the way I really wanted to paint it.  I’ll do it too, but on a larger canvas:

Doesn’t that evoke Hopper?  Edward Hopper lived on the Cape and painted many of the buildings.  I haven’t been able to find that he painted this building, but I’ll bet he did.  How could he resist?  Yes, I moved the flagpole.  Had to be done.

The little quickie I did on our way out of town owes its life entirely to the lavender color of the turned-over boat I spied.

The other thing that is going on here is the attempt to convey the peekaboo effect of the foreground tree, hanging over the two boats.  It’s not easy.  You can’t really paint each individual leaf, but you can’t mass them together too solidly either.  I’m not sure I got the balance correct here.  If only the sun had been coming in another direction, I could have had shadows of leaves on the boat.  That would have been cool!

The other thing I’ve got going on is Figure in the Landscape, like last year.  Every Sunday in David Curtis’ Gloucester garden.  I will wait until I have four accumulated and do a separate blog about them.  The trouble with painting a lot is it leads to writing a lot in the blog.  I coulda been paintin’ instead!

At the Bartlett Inn in Bartlett;  at the Bernerhof Inn in Glen; at the Red Jacket Inn in North Conway;  at the New Hampshire Antique Co-op in Milford;  at the Norris Cotton Cancer Center in Manchester, part of the Healing with Art program;  and at the law offices of Mesmer and Deleault at 41 Brook St in Manchester.