I finally “finished” (I had to stop fussing with it because deadline to submit was Friday) Fur.  Note the size of the painting–it is much bigger than life.  I’m pleased with its furriness, and proud of the gold heart locket which I dreamed up without any help from a reference photo.  Now, cross your fingers in the hope that the juror for this exhibit, Eric Aho, isn’t a dogs-only lover, and isn’t allergic to cats (but I am, so that’s not determinative).

I don’t often create something specific in response to a call for art, but in the case of Purr,  oops, I meant Furr,  I like to think the Call for Art got me thinking, which led to the inspiration to paint this particular picture.  The title and theme is “LOVE”, and the juror is an abstract landscape artist whom I greatly admire, which made me stop and consider the possibilities.  The idea of Love led, of course, immediately to the idea of Cats, and thence to the idea of the fur that makes cats so lovable.  To tie more unmistakably into the exhibit theme(as if that mattered!), I included the heart locket.  The claw showing at bottom left is my acknowledgement of the unpredictable and imperious nature of Cat, whose soft furriness conceals a weapon to punish whoever fails to give proper respect.  All that thought, but the result is likely to be yet another canvas stashed away in a portfolio.   That doesn’t matter.  What matters is, I painted.  I submitted.  I tried.

Our model for Tuesday Life Group showed up armed with thumbnail reproductions of Michelangelo’s paintings on the ceiling of the Sistine Chapel, from which selection we were to choose a pose.  The pose we chose was one of the  twelve naked, male figures lounging in the corners of each of the three major sections.  Before going any further, I’d better show you the drawing that resulted:

We were puzzled by the wreath—an item I associated more with Roman emperors than with Christian iconography.  On a whim,  I included it in my drawing, and was pleased with the effect–it added interest and weight to the top of the page, but I didn’t believe that had been Michelangelo’s purpose in so adorning these particular figures.  So I was off to Wikipedia to find the explanation.  Turns out the wreaths are acorn wreaths, and the figures wearing the wreaths are called “Ignudi”.  And that’s it.  No more knowledge to be had.  There is a suggestion that they could be angels; angels don’t necessarily come equipped with wings.  As for what the Ignudi were doing in the corners, I bet they are purely decorative.  Those corners would have looked “naked” without the Ignudi.  According to Wikipedia, the painting of the Ignudi demonstrates, more than any other figures on the ceiling, Michelangelo’s mastery of anatomy and foreshortening and his enormous powers of invention.  So there you are–he was showing off.  Not so different from the reason I included the wreath in my drawing.

at the Hatfield Gallery and the East Colony Fine Art Gallery in Manchester (both are in Langer Place, 55 S. Commercial St., Manchester, NH);  at the Gallery at 100 Market Street in Portsmouth;  at the Bartlett Inn in Bartlett; at the Red Jacket Inn in North Conway;  at the law offices of Mesmer and Deleault at 41 Brook St in Manchester; at the Manchester office of Congresswoman Carol Shea Porter;   and at her studio by appointment (email: alotter@mac.com).

I don’t have any major project under construction (like the poster competition), but I am keeping busy with the paint.  Having lots of smaller projects of different kinds makes me happy.  In fact, it dawned on me quite recently that I don’t even know how to finish a big project–I seem to specialize in plein air paintings and portraits and nudes from 3-hour sessions–all of which are by some artists considered good only as studies for something bigger.  I’m taking a portrait drawing class with Deirdre Riley at the Institute, and we are working on one charcoal portrait for the last three weeks of 3-hour sessions.  Deirdre asked me last Friday if I wanted to start a new one or try to bring what I already had to a more polished conclusion.  I answered, polished conclusion, because that’s exactly what I don’t know how to do.  The demo by Stephen Assael drove that point  home.  Now there’s a man who knows how to bring a painting to a polished finish!  Every molecule of paint must be in the right spot before he is satisfied.

Next week, I hope to be proudly displaying a charcoal portrait finished to the nth degree of development.  Unfortunately, the usual quickies are all I have to show for this week. I will start with the most polished, which you have seen before, because it deserves a second look without all those annoying light reflections.  This is my third attempt at getting a good photo of it, and I think third time was the charm. 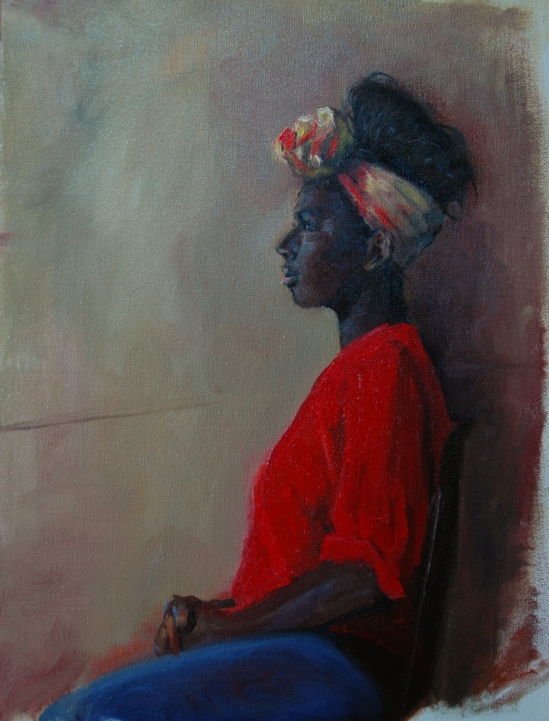 Red Sweater is from the Cameron Bennett workshop, the last one, the interior one.  I’m really liking how the red sweater came out–such a simple thing compared to facial features or even the head wrap, but at least I got it right.

Next is a pair of 6x6s; yes, it’s already time to start on the 6x6s.  Our (Womens Caucus for Art) 6×6 show was held in February, but that show was a postponed version of the November exhibit.  So now we have one again in November and time is running short.

The Garden is painted from a photo that I took last week at the Prescott Park Arts Festival.  There was no vantage point from which to paint this scene, but I can remember, with the help of my photo, the light that made it so enchanting. 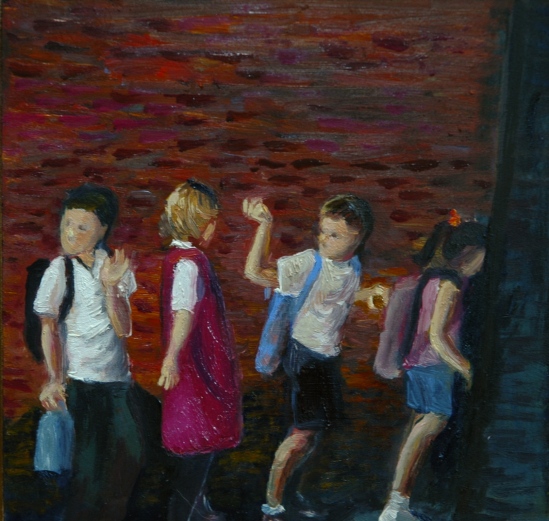 The line of children is from a fairly old photograph taken of a granddaughter entering first grade, on that first day.  It caught my fancy one day and I decided it was worth at least a 6×6 format.  I might try to do more with the faces.  I kind of gave up, maybe too soon.  I’m proud of the gestures.

Overlooked in previous weeks–no, not overlooked because I consciously set it aside, let’s say postponed–is another portrait of Fletch.  It may not capture his likeness as well as some others of mine, but I wasn’t focussing on likeness.  I was fresh from the Steve Assael workshop, and my attack on this painting very much reflects the Assael influence. 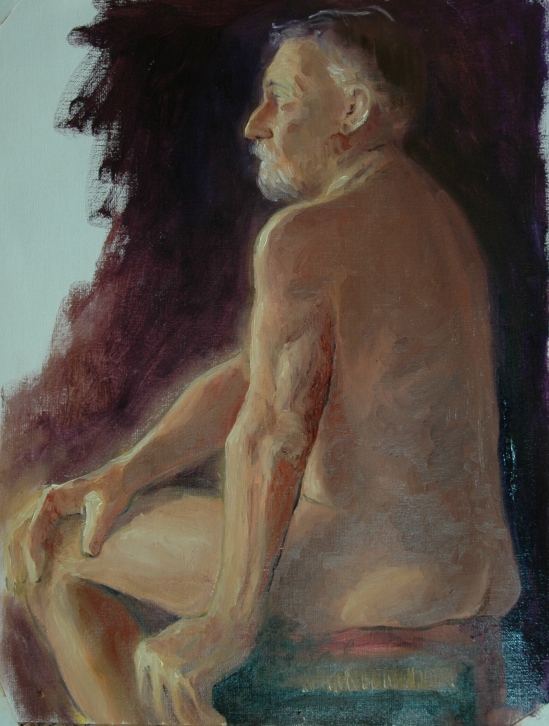 Fletch under the Assael Influence

Last, and least (as far as size is concerned) is this portrayal of four little piglets taking a nap at Phoenix Farm when I visited it with Sharon Allen a few months ago.  I was charmed by how they lined up, alternating heads and tails.  These adorable little piggies are probably big porkers by now, being readied for someone’s dinner table.  No Charlotte to save them. 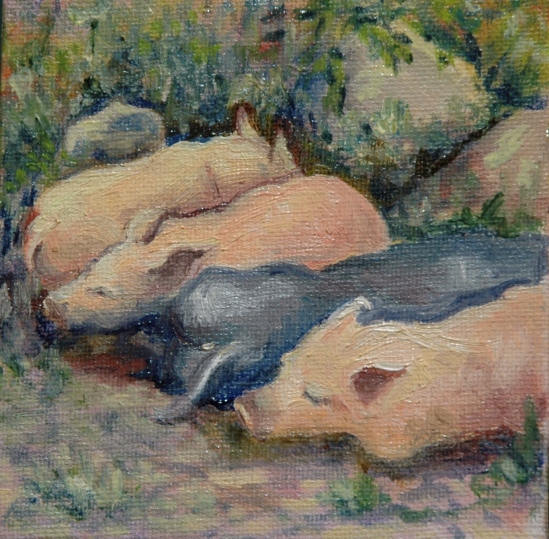 Piggies was painted on a tiny 2-inch by 2-inch canvas.  The painting is destined to be a favor for one guest at a charity event called the Storybook Ball.  East Colony has volunteered to decorate a table for the event, and we chose as our theme the storybook “Charlotte’s Web” by E.B. White.  (It was my idea.)  Each guest at our table will take away an original 2×2 painting, but that’s only a small piece of the project.  Our table is going to be spectacular rendition of barn and web and spider and all the other characters from the book.  The charity benefiting from all this activity is “CHAD”, or Children’s Hospital at Dartmouth.

at the Hatfield Gallery and the East Colony Fine Art Gallery in Manchester (both are in Langer Place, 55 S. Commercial St., Manchester, NH); at the Kimball-Jenkins Gallery in Concord, NH; at the Bartlett Inn in Bartlett; at the Red Jacket Inn in North Conway;  at Stella Blu , an American Tapas restaurant in Nashua; at the law offices of Mesmer and Deleault at 41 Brook St in Manchester;  and at her studio by appointment.  Two paintings hang in the Manchester office of Congresswoman Carol Shea Porter and a poster reproduction hangs in the Currier Museum of Art, also in Manchester.  Reception September 5, 5 to 6 (blessedly short) with the Congresswoman and the artists.

Inadvertently omitted from the above line-up in weeks past was the painting I shipped down to the East End Art Gallery in Riverhead, Long Island.  And coming up in September is the Boston Arboretum exhibit, which chose one of my paintings for its annual Jamaica Plain Open Studio exhibit, which you would know all about if you were one of my Facebook friends.